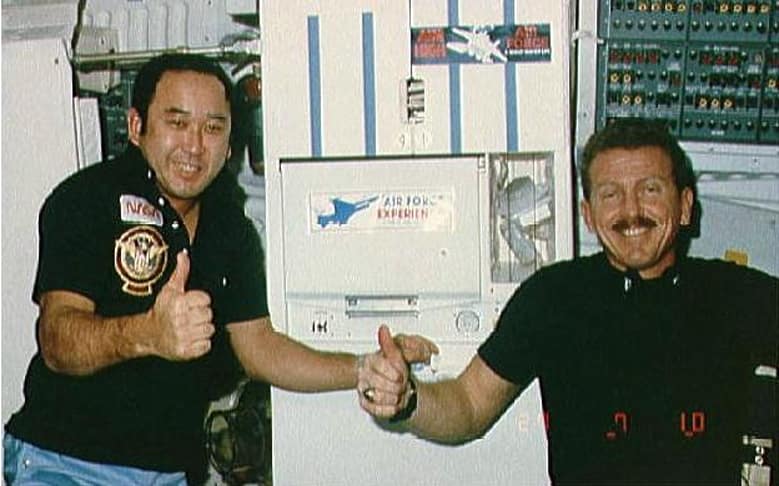 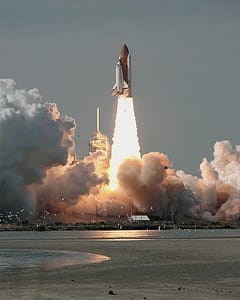 Ellison departs on STS-51C aboard the Space Shuttle Discovery. The shuttle blasted off from NASA’s Kennedy Space Center on January 24, 1985 at 2:50 p.m. EST. Credit: NASA.

“Being his first mission, there was nothing else to compare it to.  It was the ultimate thing for him to be able to go,” shared Ellison’s widow, Lorna Onizuka during a phone interview this week.  “We were really excited for him.”

Because the cargo aboard STS-51C was top-secret, details of the mission were withheld and remain classified to this day.  During the intensive training period leading up to launch, Ellison had to conceal much of his activities at work.

“In the family, it was kind of odd because he really couldn’t tell us where he was going, or when he was leaving,” said Lorna.  “He would call in and help his kids with their homework over the phone, even though we didn’t know where he was calling from.”

Rob Kelso, Executive Director at The Pacific International Space Center for Exploration Systems in Hilo, Hawaii, served on NASA’s payload team at mission control for STS-51C, and worked closely with Ellison for three years leading up to the mission.  Kelso was responsible for preparing the classified payload for flight at mission control, and Ellison shared parallel duties aboard the shuttle after liftoff.

“He was a joy and so easy to work with.  He was very friendly and funny, and he really worked hard toward building an ohana between the flight control team and the flight crew which I think ties into his Hawaii heritage,” said Kelso.

Kelso and Onizuka worked closely together on the mission team tasked with the preparation and deployment of the secret DoD payload. Their team adopted the kangaroo as their mascot. The flag underneath the certificate above was given to Onizuka by Kelso and flown aboard STS-51C. Credit: PISCES.

The mission’s departure date was delayed on multiple occasions owing to technical issues.  Ellison and his fellow crewmates were originally scheduled to launch on STS-10 in November of 1983, but the date kept getting pushed back.

“It was a lot of anticipation and a long training. And kind of a culmination to having waited longer than anticipated to get the payload out,” said Lorna.  “The week before, going down there, you really start getting excited knowing it’s real and it’s not going to be postponed again.”

Slated for departure on January 23, 1985, STS-51C kept the crew and families in suspense one more day when extreme winter temperatures postponed the launch.  But on the following day, Ellison’s dream of spaceflight became a reality as he and his crewmates made a successful launch from NASA’s Kennedy Space Center.

“They trained so long I think they all thought they were related,” Lorna laughed.  “They shared a common bond and common respect for the work that needed to be done and they shared a friendship. They had each other’s backs.”

Because of the mission’s secrecy, NASA did not broadcast the usual pre-launch flight commentary until nine minutes before lift-off – a first in NASA history.  The Air Force issued a brief statement indicating that the shuttle had successfully launched its payload with an Inertial Upper Stage rocket during its seventh orbit.  The only comment by crew members on the top-secret endeavor was recently uttered by Payload Specialist Payton, the first military astronaut in space:  “It’s still up there, and still operating.”

Having successfully completed their mission, the crew and shuttle returned to Cape Canaveral, Florida, on January 27 following three days in space and 48 trips around the Earth.

Lorna commented on Ellison’s disposition after returning from space: “His first night back home he was really quiet, and he was kind of in awe of what he had done and where he had gone… I think he was just basically awestruck by the entire experience.  I thought that was fabulous that something like that could impact regular people in such a way.”

Ellison was born in Kealakekua, Kona, on Hawaii Island on June 24, 1946.  He graduated from Konawaena High School and earned both a bachelor’s and M.S. degree in Aeronautical Engineering at the University of Colorado at Boulder in 1969.  The Big Island native joined the U.S. Air Force in January, 1970 and excelled as a test pilot and flight instructor.  In 1978, NASA recruited him as an astronaut candidate where he worked in various roles supporting spaceflight missions.

Referring to the anniversary of Ellison’s first flight, Lorna said: “It’s a day that I always look forward to, a day to send Mahalo to the people of Hawaii who supported him and believed in him all along and made it possible for him to fly on STS-51C.”

“I really feel that this was not only a significant flight for our country, but also meaningful for Ellison’s first flight,” Kelso added.  “Looking back now, it’s very special to honor the 30th anniversary of that mission.”

Ellison perished aboard the Space Shuttle Challenger on January 28, 1986, when the craft exploded shortly after launch, killing all seven crew members aboard.  The cause was determined to be a ruptured fuel tank caused by one of the booster rockets.  He is survived by his wife, Lorna, and two daughters. After his death, Ellison was promoted to the rank of Colonel and awarded the Congressional Space Medal of Honor.

Ellison Onizuka’s legacy in Hawaii is unmistakable and continues to inspire local youth through educational programs, events, and the memory of his incredible journey into the heavens.

“I know that he would want to extend his Mahalo to everyone.  Hawaii played a big part in who he became and why he became who he was,” Lorna said.