NASA Prepares Next Mars Rover to Seek Out Life 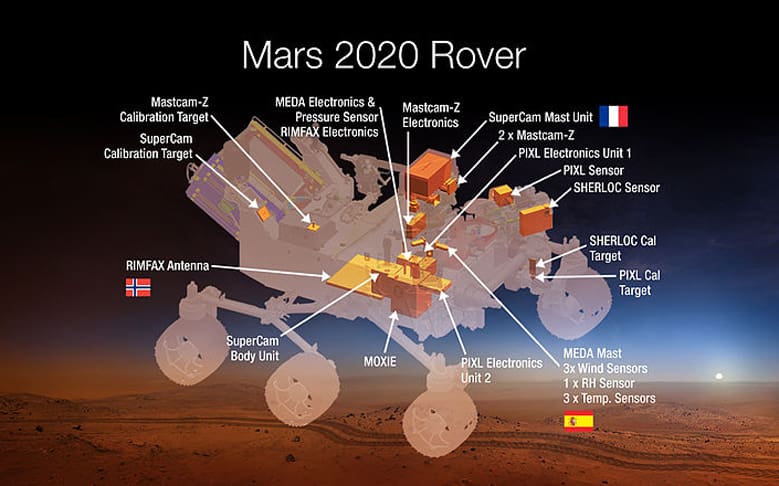 NASA is preparing its next Mars mission for launch in 2020 with a new rover designed to seek out the existence of life on the Red Planet.  The yet-to-be named rover, currently dubbed ‘Mars 2020’, will carry a payload of seven state-of-the-art instruments capable of conducting in-depth analysis and research toward its mission objective.

The instrument array includes a 3D camera with zoom capabilities; a ‘Supercam’ capable of imaging and analyzing the composition of rocks as well as identifying organic compounds from a distance; an X-ray capable of fine-scale analysis of Martian elements; a laser designed to scan the ground for organic compounds; a ground-penetrating radar imager that can map geological formations; as well as an advanced weather station system designed to take measurements on temperature, wind speed and direction, pressure, humidity, and air-borne dust particles.

Another instrument planned for the rover – the Mars Oxygen ISRU Experiment (or MOXIE) – may be the key to providing life support to astronauts on the surface of Mars in the future.  The device will attempt to produce oxygen from the toxic atmosphere, which is largely composed of carbon dioxide.  If MOXIE is successful, scientists will be a leap closer to making Martian colonies a reality by being able to create oxygen in-situ (on-site) on the Red Planet.  This would also enable the creation of breathable air and rocket fuel for return missions back to Earth.

Scientists are currently charting a prime landing site for Mars 2020 – a daunting task that will take time.

“It will be a multi-year, hundreds-of-people effort to choose the landing site for 2020,” said Jim Bell, a planetary scientist at Arizona State University’s School of Earth and Space Exploration.  “There are lots of great places to go. The finalist sites for Curiosity are already listed for consideration.”

Scientists are looking for an area that once had water or volcanic activity – prime locations that could have supported microbial life in the past.  Some of the candidates include Holden Crater, suspected to be have been a lake system, as well as Eberswalde Crater, believed to be an ancient lake bed.

Mars 2020 is largely based on NASA’s Curiosity rover that made Martian contact in 2012.  The successor will follow a similar entry protocol into the Martian atmosphere using a heat shield, parachute, and “sky crane” lander that uses rockets to lower the rover to the surface on cables.

Although the instrument payload aboard Mars 2020 weighs less than Curiosity’s, it’s a technological leap forward compared with its predecessor.  If the mission is successful, it will be a crucial step in paving the way towards human contact with the Red Planet in the coming decades.