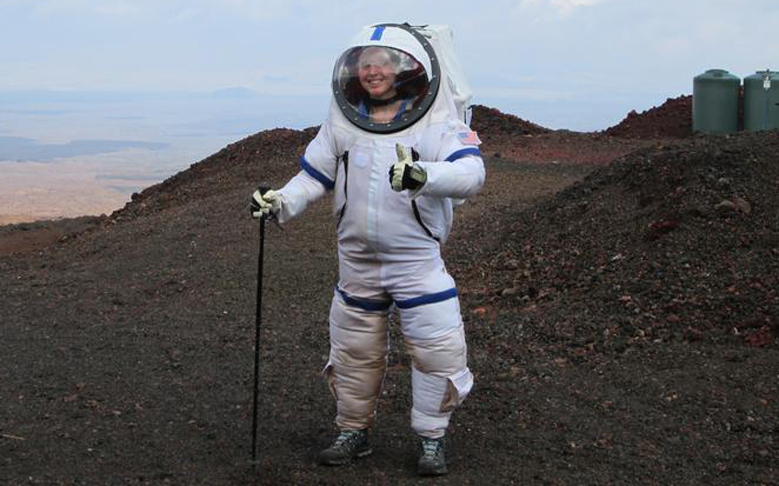 Sophie Milam shown on the Slopes of Mauna Loa volcano near the Hi-SEAS Habitat.  Credit: Forbes

Former PISCES worker Sophie Milam made the 2015 Forbes “30 Under 30” in the science category for her cutting edge research in robotics and role in the Mars simulation mission currently happening in Hawaii.  At 26 years old, Milam is designing control systems for ‘tensegrity’ robots – spherical bots held together by tension – working with the Intelligent Robotics Group at NASA Ames Research Center in California.

She is now in her third month serving as the Chief Engineer at the Hi-SEAS (Hawaii Space Exploration and Analogue Simulation) habitat in Hawaii, a mock-up Mars mission lasting eight months that began in October, 2014.  Milam is accompanied by five other crew members for the mission, living in a geodesic dome on the slopes of Mauna Loa volcano to simulate a space colony and study the emotional, cognitive, and social effects of long-term isolation on a group of people.  It is the third and longest simulation yet to be conducted at the Mars-like habitat – and second only in duration to the Russian MARS-500 experiments conducted between 2007 and 2011.

The University of Hawaii at Hilo graduate has a strong interest in space exploration and education, and hopes to work in STEM (Science, Technology, Engineering, Math) outreach for youngsters.

“I believe that mankind’s future is space travel and that it is the responsibility of all to encourage the next generations of explorers to further our collective knowledge and inspire adventure,” Milam said.

From everyone at PISCES, congratulations Sophie!!