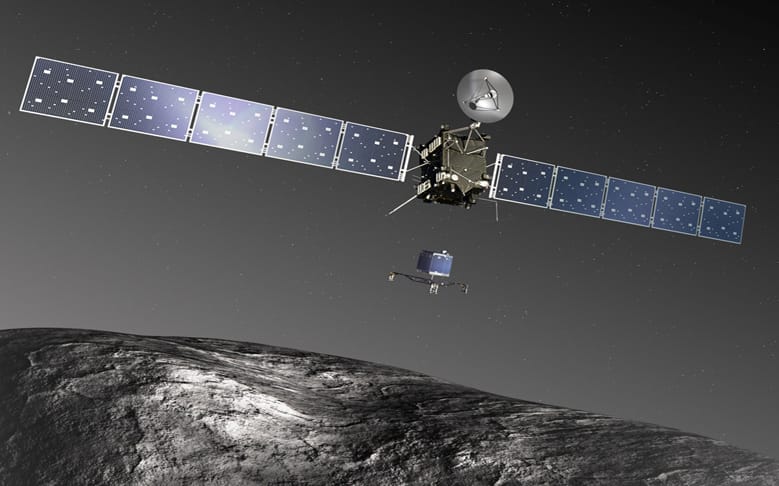 Artist rendering of the Rosetta spacecraft deploying its Philae lander to Comet 67P/Churyumov-Gerasimenko.  The historic feat will be attempted this Wednesday, Nov. 12, 2014.  Credit: ESA-C.

This Wednesday, the ESA will attempt one of the most difficult landings in history by soft-landing a probe on the surface of a comet.  The Rosetta spacecraft, which arrived at Comet 67P/Churyumov-Gerasimenko in August, will deploy its ‘Philae’ lander probe for a historic touchdown in the face of some daunting challenges.

A comet is unlike any other extraterrestrial body that a spacecraft has ever landed on.  Comet 67P/Churyumov-Gerasimenko happens to be hurling through space 40 times faster than a speeding bullet, while spinning and churning out clouds of gas and dust.  Philae will have to travel about 14 miles to meet the boulder-ridden, cracked surface – and do so without any active steering!  ESA Rosetta Flight Director Andrea Accomazzo said “we have to be a bit lucky” to make the mission a success, but expressed confidence in her team’s readiness to accomplish the difficult task.  To make matters more interesting, mission control won’t know the outcome of Philae’s attempt until 7-10 hours after it deploys from Rosetta. 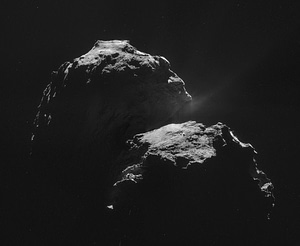 Photo of Comet 67P/Churyumov-Gerasimenko captured by the Rosetta spacecraft on Nov. 4, 2014.  Credit: ESA.

Scientists are excited for a successful outcome.  The mission could provide a valuable understanding of comets, and reveal new insights into the formation of our solar system some 4 billion years ago.  Lead ESA Mission Manager Fred Jansen describes the comet as a “time machine”, containing materials from the beginning of our solar system that will give us a first-rate look into the past.  Research of the comet’s surface may even reveal the origins of water in the solar system.  So far, the Rosetta spacecraft has collected extensive data on the comet, determining the icy ball smells a bit like ‘rotten eggs’.

Rosetta and Philae reached Comet 67P/Churyumov-Gerasimenko in August this year, following a 10-year, 4 billion mile journey with multiple gravity assists around Earth, Mars, and the Sun.  The duo are currently orbiting just over 18 miles from the comet’s center, and will edge in closer to prepare for the landing.

Space.com will provide live coverage of the landing, and the ESA and NASA will host webcasts following confirmation of a successful touch-down.

To appreciate just how difficult this landing is, check out the video below.  The endeavor is truly a historic moment for space exploration!