NASA Plans to Mine Water on the Moon 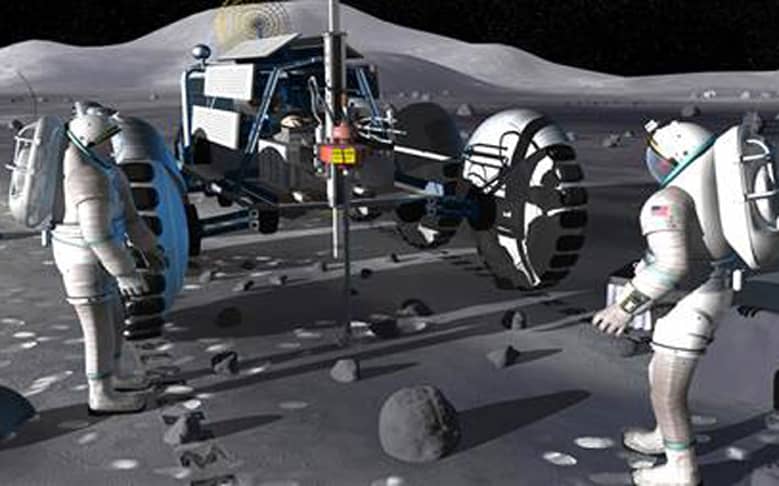 Artist rendering of astronauts and a lunar rover equipped with a robotic drill searching for water deposits frozen beneath the lunar surface.  Credit: NASA

Inhabiting space is no easy endeavor.  All the necessities for supporting life are far from reach.  But the basic elements exist on places like the Moon and Mars to extract necessities like drinking water, rocket fuel, and other resources to support life and further the collective endeavor of space exploration.

Space agency scientists are currently in the process of formulating two such missions to the Moon for this very purpose – specifically to seek out water in the form of ice deposits that could be extracted and utilized by humans and robots alike.  These missions, called the ‘Lunar Flashlight’ and ‘Resource Prospector Mission’, hope to blast skyward by 2017 and 2018, respectively, pending official approval by NASA.

“If you’re going to have humans on the moon and you need water for drinking, breathing, rocket fuel, anything you want, it’s much, much cheaper to live off the land than it is to bring everything with you,” said Barbara Cohen of NASA’s Marshall Space Flight Center – the principle investigator for the Lunar Flashlight mission.

Lunar Flashlight intends to launch on NASA’s new SLS (Space Launch System), a 30 story-tall megarocket designed to blast payloads into deep-space with unprecedented force.  Ironically, the body of the Lunar Flashlight spacecraft is only about the size of a cereal box, according to Cohen.  However, it will expand in space once it deploys its 860 square-foot solar sail, propelling it Moon-ward by catching solar photons.  Once reaching the Moon it will make about 80 passes in orbit, measuring and mapping water ice deposits in permanently shadowed craters that could be accessible to future human and robotic explorers.

The Resource Prospector Mission (RPM) plans to send a rover to the lunar surface to get an even closer look, measuring water concentrations using a neutron spectrometer and taking samples with an on-board drill.  RPM also plans to extract oxygen from lunar dirt in a demonstration of ISRU (in-situ resource utilization). The oxygen can then be combined with hydrogen carried on-board to make water.

NASA intends to conduct another ISRU test on the surface of Mars in 2020 to pave the way for human exploration on the Red Planet.  The on-board instruments will generate oxygen from the carbon-dioxide-rich Martian atmosphere, demonstrating the usability of in-situ resources in space, and opening a new chapter in space exploration.