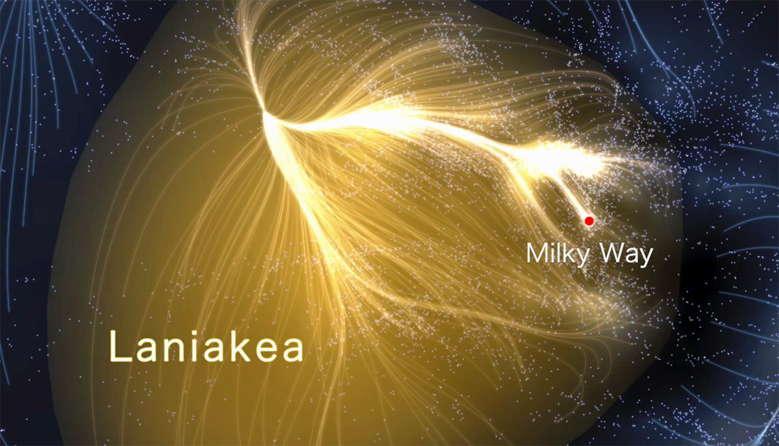 Computer generated graphic of the “Laniakea Supercluster”, a massive formation of countless galaxies including our own – the Milky Way.  Image: Nature Publishing Group.

Picture this: there is Earth, then our Solar System, then our Milky Way Galaxy, and then galaxy clusters. Then, there are superclusters – massive, dense groups of countless galaxies tethered together by filaments that create enormous strings branching into the depths of the cosmos.

A University of Hawaii at Manoa (UHM) astronomer has just led an effort mapping the supercluster containing our own Milky Way galaxy – appropriately named “Laniakea” – or ‘immense heaven’ in Hawaiian.

UHM scientist R. Brent Tully and his team successfully defined the Laniakea supercluster by measuring the play of gravitational forces among galaxies and their velocities across space.  According to their results, Laniakea is 500 million light-years in diameter, containing the mass of a hundred quadrillion suns and 100,000 galaxies!  If that’s not mind-boggling enough, the galaxies are being drawn inward at cosmic speeds towards a gravitational well known as the “great attractor” – which occasionally spits galaxies out like stray bullets.

The name Laniakea was suggested by Nāwa’a Napoleon, an associate professor of Hawaiian language at Kapiolani Community College, in honor of the Polynesian navigators who used the stars to steer their voyages across the Pacific Ocean.