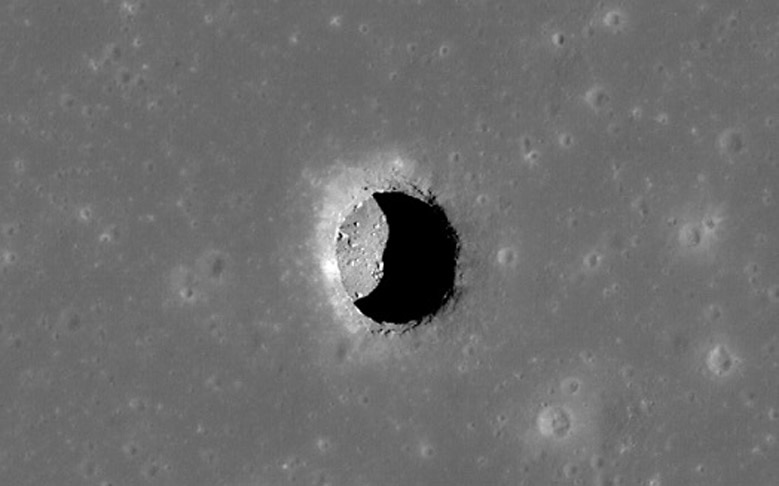 An image taken by the LRO (Lunar Reconnaissance Orbiter) of the ‘Sea of Tranquility’ pit-crater (Credit: NASA/GSFC/Arizona State University).

It’s no small challenge to build a settlement on the moon.  An endless barrage of micrometeorites, damaging solar radiation, and the destructive effects of fine, abrasive lunar dust make it extremely inhospitable.  Not to mention the extreme temperatures which can range from over 250 degrees Fahrenheit during the day and below 240 at night.

Fortunately, there are some solutions in mind for these hazards and one of them involves the discovery of lunar ‘pits’- holes in the moon’s surface that could lead to caves, which astronauts may be able to use for shelter.  NASA’s Lunar Reconnaissance Orbiter (LRO) spacecraft captured over 200 images of these pits, ranging in size from about 5m – 900m across.  The images were identified using a computer algorithm developed by Robert Wagner of Arizona State University.  Wagner thinks these holes could offer an effective solution that would enable astronauts to work on the lunar surface for extended periods of time.

“A habitat placed in a pit – ideally several dozen meters back under an overhang – would provide a very safe location for astronauts: no radiation, no micrometeorites, possibly very little dust, and no wild day-night temperature swings,” said Wagner.

Many of the pits were found in large craters or the lunar maria – dark areas on the moon made up of far-reaching lava fields. Scientists speculate that one of the ways they may have formed is from ancient lunar lava flows beneath the moon’s surface – similar to the ones we have here on Earth – that partially caved from the vibration of a meteorite impact, thus creating a hole.

More images from NASA’s LRO spacecraft show all of the known maria pits and highland pits. Each image shows an area of about 728 feet wide. (Credit: NASA/GSFC/Arizona State University)