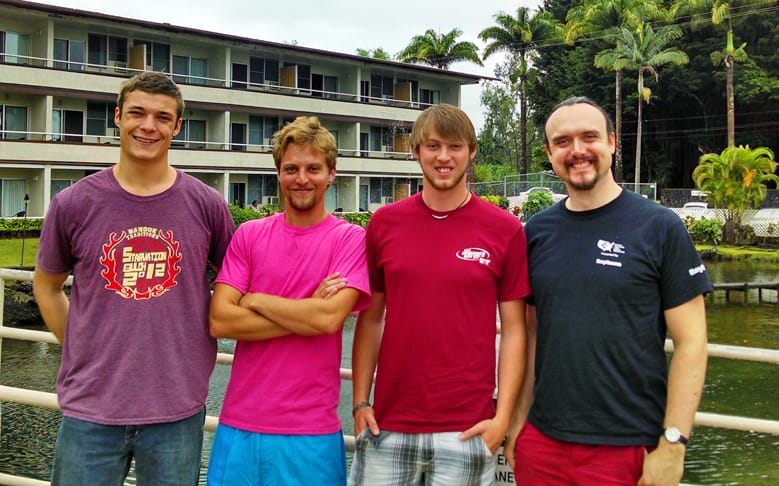 The University of Alaska, Fairbanks (UAF) team has two NASA Robotic Mining Competitions (RMC) under its belt, and is now in Hawaii, ready to compete in the first annual PRISM (PISCES Robotic International Space Mining) competition.

UAF is the first PRISM team to fly in, arriving just yesterday (Wednesday, July 16) on the Big Island of Hawaii, bringing their latest robot and preparing to go head-to-head with six other U.S. colleges.  Their goal:  “Victory or death!” 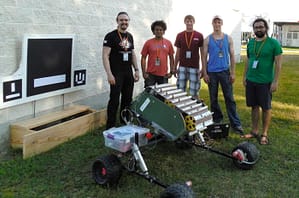 UAF Robotics Team with the MANTIS at NASA’s 2014 Robotic Mining Competition in May.

Their 100 lb. mining-mech named “MANTIS” (short for Mining and Autonomously Navigating Terrain In Space), has a unique design that sets it apart from the competition: the team uses off-the-shelf parts including Barbie wheels!

“In our experimenting in dust, really big, really low tread wheels seem to be the way to basically float over the dust without digging a hole,” said Lawlor.

The team found the tread they were looking for on a Barbie Powerwheels Jeep, enabling movement over rugged, dusty terrains without getting stuck.  They also incorporated a linear actuator which extends the front wheels and allows the mining head a greater range of movement.   The current model, ‘version 2.0’, is the result of a year’s work by the team, streamlining the robot’s design and testing its abilities in a simulated lunar arena arranged in Lawlor’s backyard. And their hard work has paid off! The UAF robotics team won NASA’s Judges Innovative Award at this year’s RMC.

The team says it feels great to be participating in PRISM and thinks its a hands-on learning experience.

“There’s certainly a lot of things that go into fabricating and designing a robot like this that you don’t really get that much experience with in engineering classes,” said Newbrough.

PRISM is based on NASA’s Robotic Mining Competition but takes the contestants out of the lab and into the more realistic setting of the outdoor, NASA-proven, high-fidelity PISCES analogue test site, which is much more technically challenging.

The competition will kick-off Monday, July 21st, with a public exhibition at Bayfront Park in Hilo from 10 a.m. to 2 p.m., and will continue through Friday, July 25th.  Click HERE to learn more about Hawaii’s first robotic mining competition and visit http://fairbanksrobots.wordpress.com to see more of UAF’s MANTIS robot.