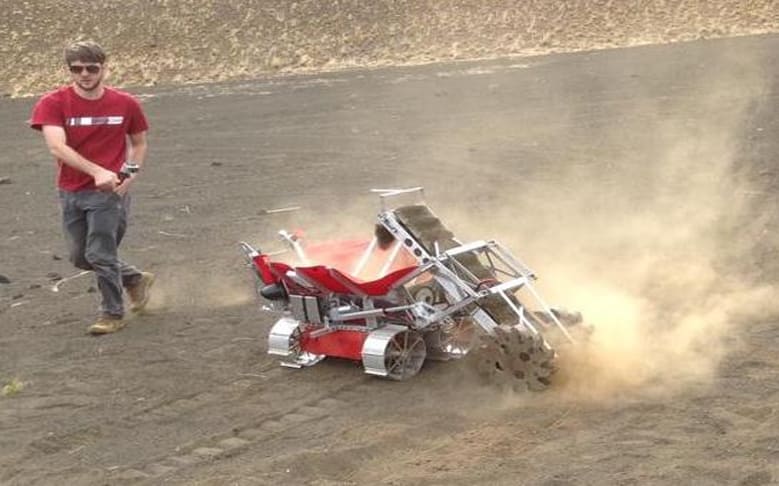 For the first time ever, Hawaii will be home base to what’s considered the ‘World Cup’ of robotic space mining competitions.

This July, college teams from all over the globe are invited to compete in PRISM (PISCES Robotic International Space Mining), an event that has evolved from the annual NASA Robotic Mining Competition (RMC) at Kennedy Space Center.  RMC, formerly known as Lunabotics, is a highly successful college-level engineering challenge where U.S. teams design, build, and dig with a robot that can navigate, collect and deposit regolith (martian dirt) in a bin.  PISCES has participated in RMC as an invited judge in past years and is now taking the competition to the next level by way of PRISM, which is open to ALL college teams world-wide.

For this first year, PRISM will host the top winners of RMC. They will take their proven designs, which have been tested in a laboratory during RMC, and place their robotic mining machines in the more realistic and rugged environment of PISCES’ NASA-proven high-fidelity Mars and Lunar Analogue Test Site.

The intent of both RMC and PRISM is to encourage universities to develop innovative concepts that could potentially be applied to real-world robotic space excavation technologies.  Digging for and collecting regolith on other planets is the first step in ISRU (In-Situ Resource Utilization), which is the process of manipulating raw materials into resources needed for human survival in space – taking water and ice on the Moon, for example, and breaking it down into hydrogen and oxygen to make rocket propellant. Through PRISM, PISCES also intends to spur interest and growth in college-level robotics on the Big Island at the University of Hawaii at Hilo, and throughout the State of Hawaii.