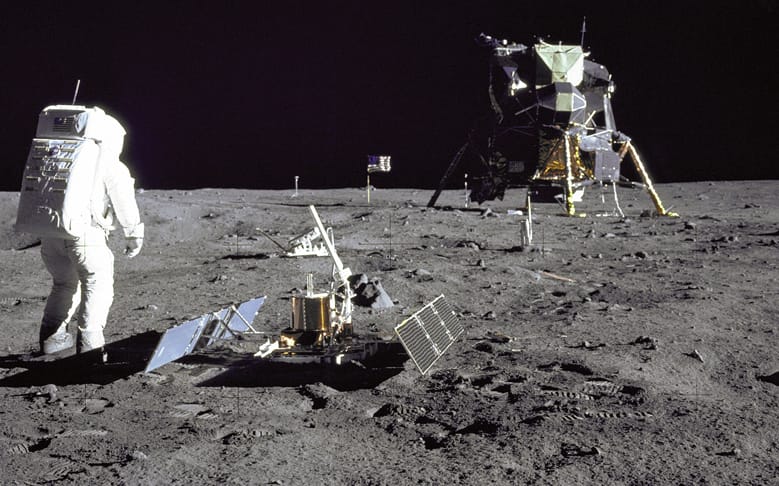 Hawaii lawmakers approved a PISCES Resolution April 21st honoring Hawaii’s role in the historic Apollo 11 mission and urging action to preserve “Tranquility Base” – the historic landing site where astronauts Edwin ‘Buzz’ Aldrin and Neil Armstrong first set foot on the moon.  The Resolution, SCR 82, comes on the 45th anniversary of the first-ever moon mission, commemorating the epic achievement by designating July 20th, 2014 as “Tranquility Base Day.”

Hawaii played an indispensable role at all stages of the Apollo 11 mission.  Before launch, the volcanic terrain of Mauna Kea and Kilauea provided essential training grounds very similar to the lunar surface.  During the spaceflight, Kauai’s Kokee Tracking Station relayed communications between the Apollo astronauts and NASA’s mission control in Houston, Texas.  Hawaii also supported the recovery of the returning moon-men after their spacecraft splashed down in the Pacific Ocean about 800 miles southwest of the Islands. 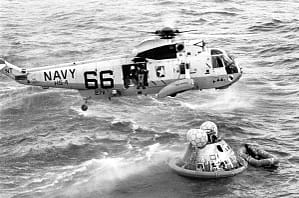 The Apollo 11 crew’s re-entry capsule splashing down in the Pacific Ocean about 800 miles from Hawaii on July 24, 1969 (photo courtesy Milt Putnam)

The Resolution supports a growing movement to protect Tranquility Base from disturbance amid a flood of heightened lunar activity in the coming years.  Though many missions have targeted lunar orbit, few have actually landed on the surface.  Several missions are slated for 2015, spurred by the Google Lunar XPRIZE (GLXP) competition which challenges privately-funded space teams to land on and traverse the moon’s surface using unmanned robotics while beaming back live data and images to Earth.   Last December, China made the first lunar landing in 37 years when its Chang’e 3 touched down and deployed the ‘Jade Rabbit’ robotic rover.

The Navy helping astronauts Michael Collins, Neil Armstrong, and Buzz Aldrin out of the re-entry capsule and into a raft (photo courtesy Milt Putnam). The Navy aircraft carrier USS Hornet then transported the Apollo crew and capsule to Pearl Harbor, before they headed back to Texas.

Hawaii is one of three states – including California and New Mexico – pushing for preservation of Tranquility Base and all associated artifacts.  The Senate-approved PISCES Resolution urges the United Nations Educational, Scientific, and Cultural Organization (UNESCO) to place the landing site on the World Heritage List alongside historic places like the Pyramids of Giza, the Statue of Liberty, and the Great Wall of China, to name a few.

Below are rare photos of Apollo astronauts training on the Big Island of Hawaii, obtained by PISCES Executive Rob Kelso from NASA’s Johnson Space Center. Kelso sifted through numerous negatives in NASA’s photo archive to find these extraordinary pictures documenting Hawaii’s chapter in the history of the Apollo era.