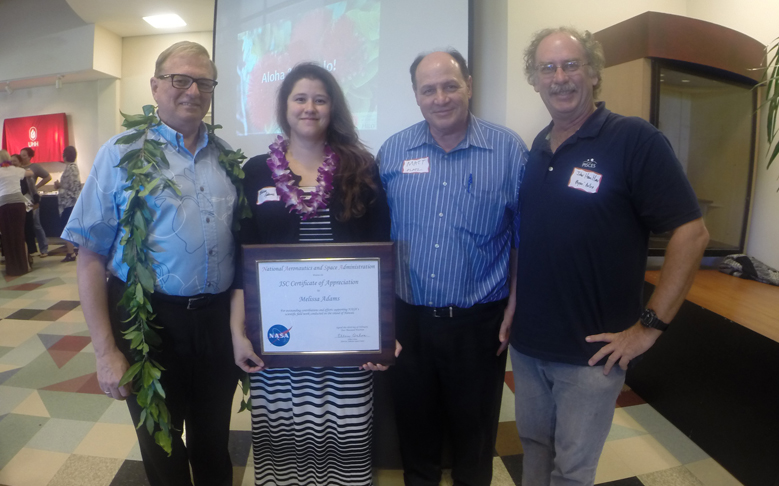 University of Hawaii at Hilo Senior Melissa Adams on May 6th was among those in the spotlight at the UH Hilo 2014 Awards and Recognition Celebration, where she was recognized for the research she conducted last summer searching for a certain type of mineral on Hawaii Island that has similar geologic properties to a mineral found on Mars.

Adams, a former PISCES intern, along with PISCES Test Logistics/EPO Manager John Hamilton, and Jacobs/NASA scientist Trevor Graff, successfully located the mineral on Mauna Kea. The team was granted permission from the Office of Mauna Kea Management, with advice from Kahu Ku Mauna, to conduct the research. 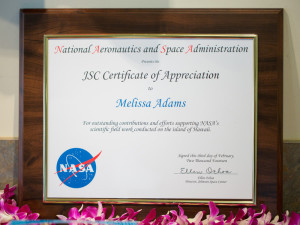 Adams’s work earned her a NASA Certificate of Appreciation, saying “her outstanding contributions and efforts…allowed the unique geologic environment of Hawaii…to serve as an extraordinary analog for understanding Mars.” UHH Chancellor Don Straney presented her with the certificate during Tuesday’s ceremony.

Adams was also awarded NASA’s Sally Ride Internship. It’s an opportunity so prestigious, only 10 internships total are awarded in the spring and fall semesters of each school year.

“I am so busy with school work that initially getting the internship did not phase me,” said Adams, a Geology Major. “But in the middle of the night, I’d startle myself out of a deep sleep and think to myself, ‘I’m going to be working at NASA this summer!'”

Adams, who is Native Hawaiian, will be working for the Astromaterials Research and Exploration Science Directorate (ARES) at the NASA Johnson Space Center (JSC). Her mentors will be Graff and NASA scientist Dr. Richard Morris.

During her Sally Ride Internship, Adams will help NASA take this research to the next level by running a chemical analysis of the mineral at JSC in Houston, Texas.

“I still cannot believe it,” said Adams. “To think of where I was two years ago and what I have done since then makes me feel so blessed. I am so grateful for the people that have been instrumental in helping me get this opportunity. To them I say my warmest mahalo nui loa!”