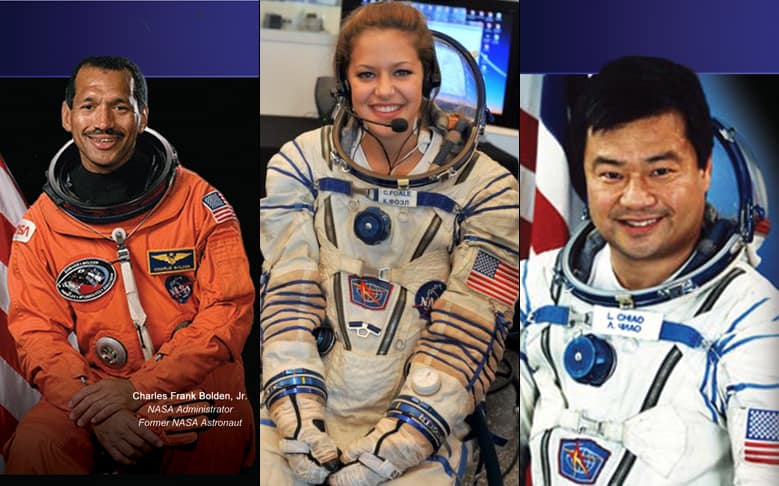 As part of its mission to strengthen STEM education in Hawaii, PISCES has loaned three spacesuits from the Heinlein Prize Trust. 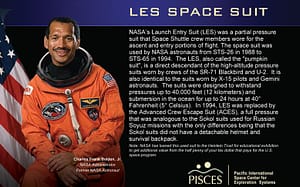 The first is an authentic NASA Launch Entry Suit (LES), also called the “pumpkin suit”, worn by NASA Administrator Charles Bolden. This is the first time this spacesuit has been in Hawaii. Bolden was nominated by President Barack Obama and confirmed by the Senate in 2009, making him the first African-American to head the space agency on a permanent basis. So far, the LES has accompanied the PISCES Moon rover during many of the events surrounding the rover’s official debut in Hawaii. It was on display at the Pacific Aviation Museum Pearl Harbor, the Hawaii State Capitol, and was featured live on KHON’s morning show as well as pictured on the front page of the local section in the Honolulu Star-Advertiser.

The second spacesuit is from the Heinlein Prize Trust’s “Have Spacesuit, Will Travel” program. It is a white Sokol (a type of Russion spacesuit) that has been modified with a velcro back so that kids (and kids at heart) can easily wear it. This program is based on the book “Have Spacesuit – Will Travel” by science fiction writer Robert A. Heinlein.

“Have Spacesuit – Will Travel” science fiction novel by Robert A. Heinlein

Heinlein (1907-1988) was an American novelist of futuristic space travel. The mission of the Trust is to promote the commercialization of space, which was Robert Heinlein’s dream. An important element of this mission is to inspire young people to dream about the future of space exploration and commerce. The Trust is involved in a variety of exciting activities to further the dreams of Robert and Virginia Heinlein, including this educational program.

This wearable spacesuit triggered a lot of giggles, oooh’s and ahhh’s in Hawaii. It was first showcased to students during Hawaii’s “Journey Through the Universe” held on March 6-14. The event is led by Gemini Observatory, and PISCES is a participant. A few PISCES team members were involved in the classroom visits designed to educate and encourage students to think about a space career.

The “Have Spacesuit, Will Travel” suit was then featured at Imiloa Astronomy Center’s Spring Break program called “Camp IMI-possible”, which was held from March 17-21. Children in grades K-5 got to wear the spacesuit and take pictures in front of a green screen with an outer space background.

From Hilo, the “Have Spacesuit, Will Travel” suit then traveled to Stevensen Middle School in Honolulu. It also got some great air time, with reporters from KHON and KITV wearing the spacesuit during one of their live shots. Heinlein Prize Trust Project Manager Russell Dula, who flew in from Texas to help PISCES with the Center’s outreach events, was also interviewed in one of the segments.

After showtime was over, the “Have Spacesuit, Will Travel” suit made its way to the PISCES Moon Rover Demonstration at the Hawaii State Capitol. Senator Will Espero, a strong advocate of the aerospace industry in Hawaii, wore the spacesuit while operating the PISCES Moon rover – a moment that made for a great photo, and sure enough, landed in the Honolulu Star-Advertiser.

The next day, the modified Sokol suit was featured at the Pacific Aviation Museum Pearl Harbor’s “Discover Your Future in Aviation” event on Saturday, March 29, where children there also took advantage of this unique photo op, pretending to be an astronaut, with a few even doing the Moonwalk.

The third spacesuit is also a Sokol suit – this one was worn by Dr. Leroy Chiao, a former NASA astronaut and the first Asian-American Mission Commander. This particular suit has stayed on the Big Island of Hawaii and was used by PISCES during one of the classroom visits for Hawaii’s “Journey Through the Universe”.

Since then, Dr. Chiao’s spacesuit has been on display at the Imiloa Astronomy Center in Hilo, starting with the Center’s “Camp IMI-Possible. It continues to be on display for the public to see.

MAHALO TO THE HEINLEIN PRIZE TRUST FOR ALLOWING PISCES TO SHOWCASE THESE SPACESUITS TO PROMOTE STEM EDUCATION IN HAWAII!