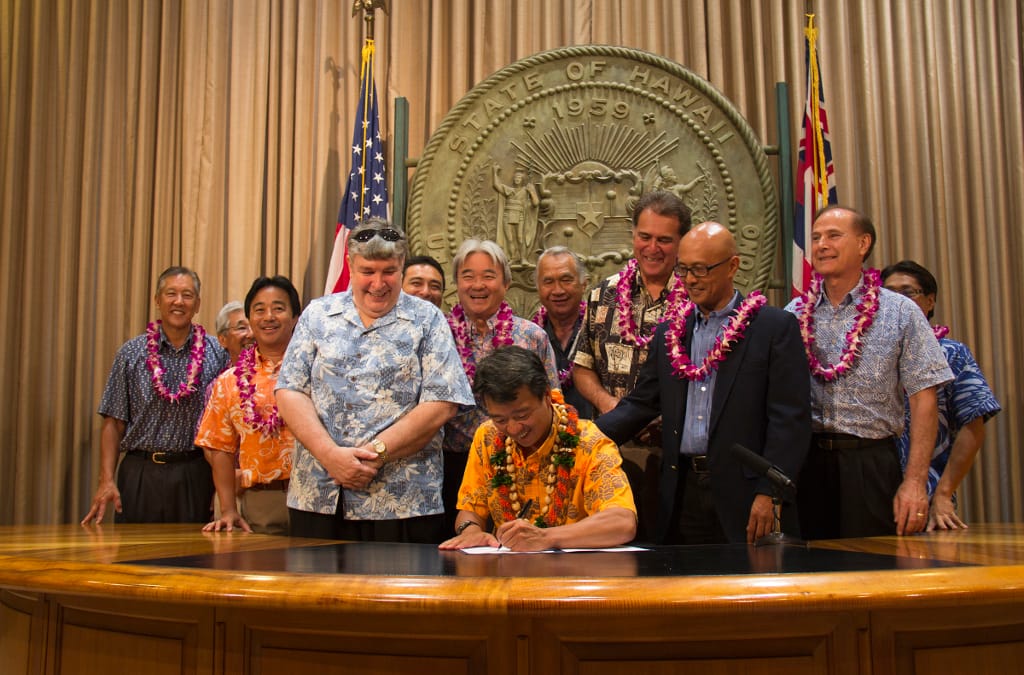 Hawaii’s aerospace industry is getting another boost from the State. At
Tuesday’s Bill Signing Ceremony held at the State Capitol, Lieutenant Governor Shan Tsutsui
signed SB1256 into law on behalf of Governor Neil Abercrombie.

Under the bill, The Pacific International Space Center for Exploration Systems (PISCES) will
receive $400,000 to continue with technology research, development and testing programs. This
is in addition to the $400,000 PISCES is receiving under Act 134, which has already been
approved through the State Budget Bill.

This funding will specifically be used to cover PISCES operations and personnel costs, as well as
to purchase equipment needed to support Center activities, such as robotics hardware and
software.

“PISCES will provide a very unique growth opportunity for Hawaii in the aerospace industry and
I think it will definitely be a major contributing factor to Hawaii as we start looking at ways to
really diversify and strengthen our economy,” said Lt. Governor Tsutsui.

Last year, the state awarded PISCES $2.34 million. $1.84 million of that funding was allocated
to begin development of PISCES’s Big Island facilities. The remaining $500,000 was used to
cover operating costs.

This year’s funding will allow PISCES staff to continue pioneering innovative projects for the
Center, which will include purchasing a 3D laser printer that can manufacture space tools out of
Hawaii’s basaltic lava rock. Because the island’s lava rock is similar to that on the Moon and
Mars (also basalt-based), 3D printing technology could prove useful for future space explorers,
who will need to make tools, such as wrenches, out of the materials on other worlds.
“If you’re living on the Moon or Mars, you can’t just go to the store to buy a wrench or a
screwdriver. You have to learn how to live off the land, just as the Ancient Hawaiians did,” said
Rob Kelso, PISCES Executive Director.

“Looking at the focus Hawaii’s education system has on STEM, Science Technology
Engineering and Math, I think this industry will certainly try to hopefully encourage more of our
youngsters to really participate in the aerospace area as well,” said Lt. Governor Tsutsui.

PISCES’s will also be initiating a “lunar concrete” project, which will involve fabricating roads
and sidewalks out of lava rock. This innovative process has two potential applications: (1) In
outer space, astronauts could use it to build structures (landing pads, berms, shelters, etc.) out of
soils on the Moon, Mars, and other planetary bodies. (2) In Hawaii, this process could be used to
build roads, sidewalks, and buildings – reducing the amount of concrete the State needs to import
from the mainland, thereby helping advance Hawaii’s Clean Energy initiative.