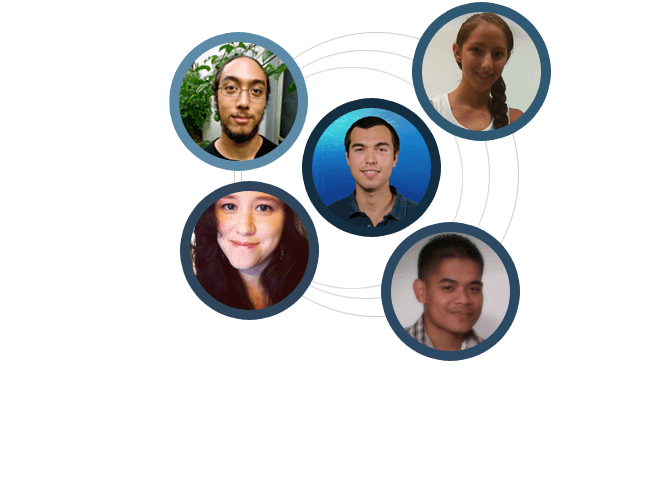 Four of the interns, Melissa Adams, Sayaalii Baker, Kevin Edwards, and Nicolas Turner, are working with Christian Andersen, PISCES Test Operations Manager, on a site characterization project. It involves surveying several potential analog sites (places on Earth that are similar to the Moon, Mars, and other planets) on Hawaii Island and assembling a database that will help future analog site users find the perfect place for their project.

PISCES’s fifth intern, Krystal Schlechter is working with John Hamilton, PISCES Test Logistic/EPO Manager, on gathering data for NASA’s Lunar Atmospheric and Dust Environmental Explorer (LADEE) Mission that departs for the Moon on August 12 th . They’ll measure the impact and frequency of meteor strikes on the moon using two telescopes and high speed cameras. NASA will use the data to help quantify possible dangers associated with living on the Moon.

The PISCES 2013 Summer Intern Program is for 10 weeks.

Background: PISCES is a Hawaii state government aerospace agency, placed under the State Department of Business, Economic Development, and Tourism (DBEDT). The agency conducts environmentally safe field demonstrations to test and validate innovative space technologies on the lower slopes of Mauna Kea under the jurisdiction of the State Department of Land and Natural Resources (DLNR). Scientists say there’s no other place on earth that has soil more similar to the surface of asteroids, the Moon, and Mars, than on Hawaii’s tallest volcano.

MELISSA ADAMS is a UH Hilo student majoring in Geology with a Minor in Math. She graduates in 2014 and plans to get her doctorate in Geology with a specialization in Volcanology and/or Planetary Geology. Adams says she pursued an internship with PISCES because she wanted to apply what she’s learned in class to a real world environment. “To experience this was a chance of a lifetime. Not many people can say, ‘welcome to my office!’ while standing on top of a cinder cone at 9000-plus feet on Mauna Kea. There’s no place I’d rather be, honestly! I am truly blessed, grateful, and fortunate!”she says. Adams says she was raised as an Army brat, and therefore isn’t from any one place in particular, but her family originated from Ho’okena. Her hobbies include collecting rocks and native plants endemic to Hawaii. Adams says she also likes to spend her free time learning Hawaiian applique quilting, and scuba diving.

SAYAALII BAKER is a UH Hilo student majoring in Environmental Science and Philosophy. He graduates in 2015 or 2016 and is pursuing a career in Environmental Management. Baker says he applied for the Summer Intern Program because he worked for PISCES last summer and wanted to work for the agency again. “Hopefully, this summer I’ll get to learn the ropes involved in site evaluations and ecological analysis,” he says. Baker was born on Oahu and raised in Pahoa. He went to Kamehameha Schools Hawaii Campus in Kea’au. He likes to spend his free time at the skate parks and is also into ‘tricking’, a type of extreme sport that combines gymnastics and martial arts.

KEVIN EDWARDS is a 2013 graduate of UH Hilo majoring in Geography with a Minor in Anthropology and a subject Certificate in Pacific Studies. He plans to continue his education at University of Hawaii at Manoa and get a Master’s degree in Disaster Management and Humanitarian Assistance. Edwards says the real hands-on work experience that PISCES offers through its internships is what interests him. “I hope to learn every aspect and details of the PISCES program and how they will use robots to study the Moon, the planets, and other extra-terrestrial objects in the universe,” hesays. Edwards is from Pohnpei, Micronesia and went to Pohnpei Island Central School. He likes to spend his spare time hiking, sight-seeing, playing video games, and basketball.

KRYSTAL SCHLECHTER is a UH Hilo student majoring in Astronomy. She hopes to graduate by 2015, then continue on to the Master of Arts in Teaching program where she can focus on becoming an elementary school teacher. She also plans to eventually go to graduate school for Astronomy. Schlechter says she’s interning with PISCES because of her prior experience with Lunar Impact Monitoring. “The moon is our closest celestial neighbor and as much as we do know about it, there is so much more to learn!” she says. Schlechter is from Portland, Oregon and went to Centennial Learning Center. She loves to hike and camp during her free time.

NICOLAS TURNER is a 2011 graduate of UH Hilo majoring in Geography with a focus on Geographic Information Systems, Certificate in Planning. He’s pursuing a career in the geospatial field, and is highly interested in remote sensing applications. Turner says he applied for an internship with PISCES because he’s always had an interest in aerospace and aviation. “[I’d take] any chance to view the earth from above and gain new insight and information from it. When I learned of the growing aerospace industry in Hawaii, I wanted to work with leaders in the field such as PISCES,” he says. Turner is from Maui and is a graduate of Kihei Charter High School. He’s currently working for the Spatial Data Analysis and Visualization Lab. Outside of work, Turner enjoys volunteering with the Coast Guard Auxiliary as an Air Observer doing aerial Search and Rescue. He’s also a volunteer firefighter with Ainaloa Company 10D.