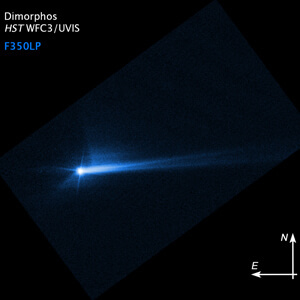 Above: A trail of debris scatters in the wake of asteroid moonlet Didymos after NASA’s DART spacecraft pummeled it surface. Credit: NASA/Hubble Space Telescope

NASA’s Double Asteroid Redirection Test (DART) in late September made history by using a spacecraft to alter the course of a celestial object for the first time ever. Since then, researchers have been observing the asteroid—a moonlet named Dimorphos—to determine whether the mission succeeded. Thanks to the help of Hawaiʻi’s ground-based telescopes operating in the Asteroid Terrestrial-impact Last Alert System (ALTAS), NASA has now reported the test as a success, shortening the asteroid’s 12-hour orbit around its parent asteroid, Didymos, by about 32 minutes—a change that far exceeded expectations.