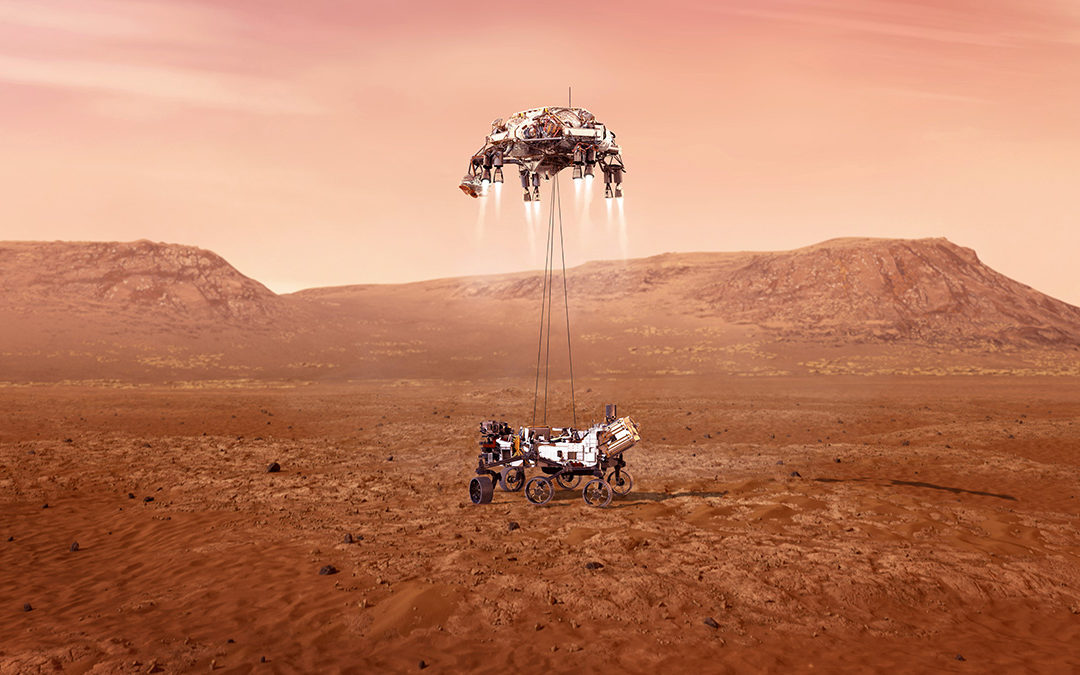 Above: Perseverance touches down on Mars aided by a jet-powered sky crane in this artist rendering. Credit: NASA-JPL.

After more than six months in flight, NASA’s Perseverance rover will touch down on the Red Planet on Feb. 18 at noon PST, beginning a new era of scientific research on Mars.

Perseverance’s core mission is to explore the possibility of life on Mars at an impact site known as Jezero Crater—a 28-mile-wide cauldron just north of the planet’s equator. Scientists believe this area once held a lake capable of supporting life. The rover will collect the first rock and soil samples to return to Earth for further study in the 2030s. Perseverance is accompanied by the first planetary helicopter, Ingenuity, which is slated to attempt five test flights in the thin Martian atmosphere.

Before this robotic duo can get to work, NASA must overcome the challenge of landing them safely on the Martian surface. And landing on Mars is exceptionally hard. With four successful landings under its belt, NASA has a promising track record given that Red Planet landings attempted by other countries only succeed about 40% of the time. Every step in the intricate landing sequence must go right to safely place the $2.7 billion rover—the most advanced ever built—and its airborne counterpart on the ground.

Upon entry of Mars’ atmosphere, Perseverance will need to slow from a blazing speed of 12,500 mph to 2 mph using a parachute and powered descent engine. The landing segment of the descent will rely on a jet-powered sky crane, lowering the rover to the surface using three cables. This technique successfully landed NASA’s Curiosity rover on Mars in 2012. The entire sequence of entry, descent and landing will happen over the course of seven minutes—also called the “seven minutes of terror,” because Perseverance will be unable to communicate with NASA until after it reaches the ground.