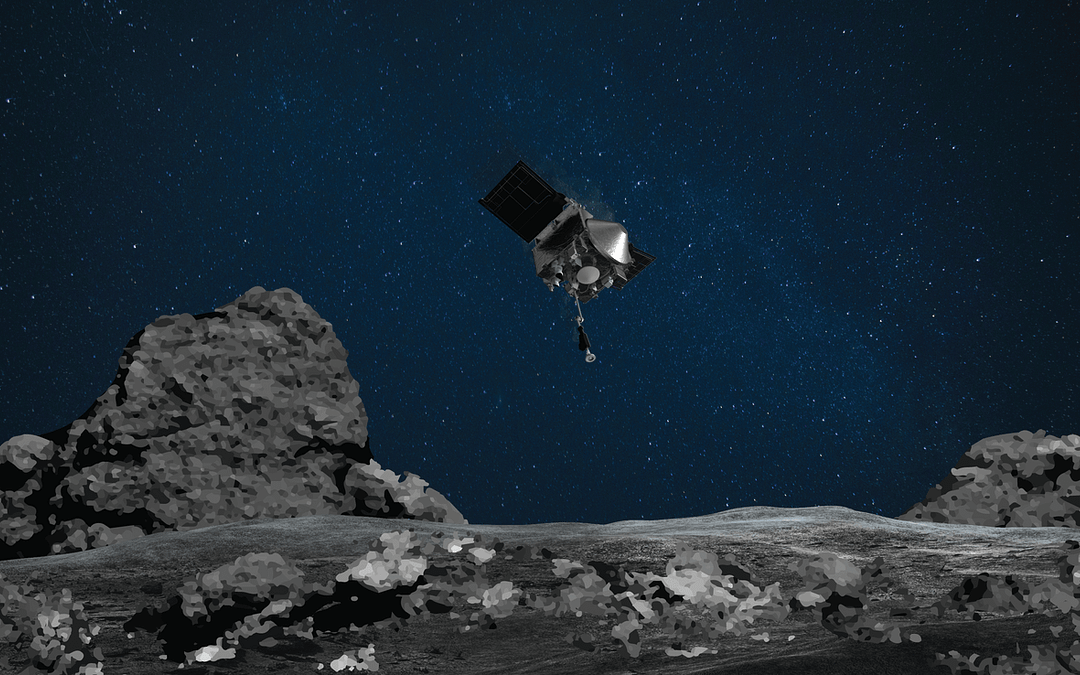 Artist rendering of OSIRIS-REx readying itself for landing on Bennu. Credit: NASA Goddard/University of Arizona.

NASA’s first asteroid sample return mission is on track to retrieve a handful of primordial rock dust for study on Earth. On Oct. 20, 2020, the agency successfully landed OSIRIS-REx (Origins, Spectral Interpretation, Resource Identification, Security, Regolith Explorer) on the surface of Bennu, a well-preserved asteroid orbiting more than 200 million miles from Earth. The landing was a historic milestone for NASA and researchers anticipate uncovering new discoveries about the formation of our solar system.

“This was an incredible feat … we’ve advanced both science and engineering and our prospects for future missions to study these mysterious ancient storytellers of the solar system,” said Thomas Zurbuchen, associate administrator for NASA’s Science Mission Directorate at the agency’s headquarters in Washington. “A piece of primordial rock that has witnessed our solar system’s entire history may now be ready to come home for generations of scientific discovery, and we can’t wait to see what comes next.”

The mission took flight from Cape Canaveral on Sept. 8, 2016, and reached Bennu on Dec. 31, 2018. After a carefully orchestrated, four-hour descent from orbit, the OSIRIS-REx dodged a building-sized boulder (aptly named “Mt. Doom”) and landed in a clearing about the size of a small parking lot. Upon landing, the spacecraft fired a burst of nitrogen gas at the surface to stir up a cloud of dust and pebbles, capturing more than two ounces of material using an 11-foot robotic arm. The sample was placed in its return capsule ahead of schedule after concerns over possible leakage from the head of the arm.

With precious cargo secured, the mission’s return spacecraft is waiting for a favorable alignment with Earth. Launch is anticipated in March 2021, with a return landing slated for Sept. 24, 2023, in the western desert of Utah.

“I’m proud of the OSIRIS-REx team’s amazing work and success to this point,” said NASA’s Associate Administrator for Science Thomas Zurbuchen. “This mission is well positioned to return a historic and substantial sample of an asteroid to Earth, and they’ve been doing all the right things, on an expedited timetable, to protect that precious cargo.”