Titan: A Good Bet for a Sustainable Human Settlement Beyond Earth 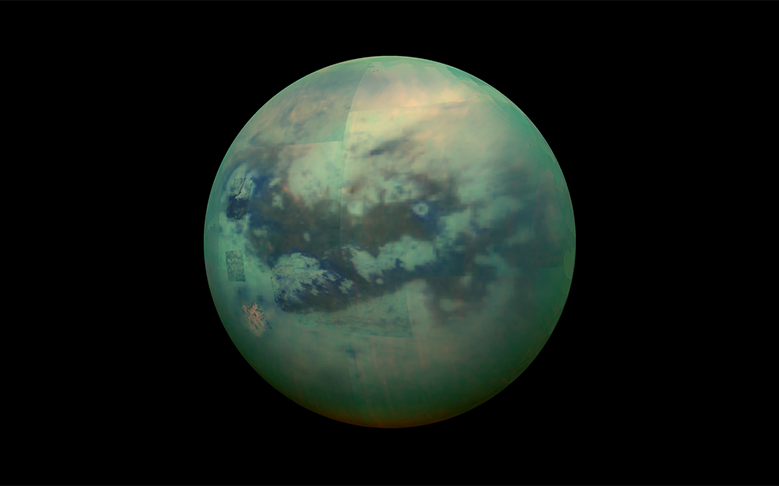 Above: A composite image of Saturn’s moon, Titan. Credit: NASA

As a kid I knew I wanted to grow up studying space in some capacity. After earning degrees in engineering and planetary science, I am fortunate enough to have my dream job of working on space missions and studying our solar system. As a science co-investigator, I worked on the Galileo mission at Jupiter and the Cassini-Huygens mission at Saturn, and I continue to work on the ongoing Lunar Reconnaissance Orbiter, plus a few other projects in between. I am also the principal investigator of the Toolbox for Research and Exploration (TREX), which is a node of NASA’s Solar System Exploration and Research Virtual Institute (SSERVI).

The TREX team is working to advance progress in both human and robotic science and exploration of the Moon. My focus is the study of moons and small bodies such as asteroids. I’m interested in what they’re made of and how their surfaces evolve in response to external processes such as micrometeoroid bombardment and radiation. Most of the moons in the solar system—including Earth’s Moon—don’t have atmospheres or magnetospheres to protect their surfaces from these processes.

One moon in the solar system that stands out as being significantly different from the rest is Saturn’s largest moon, Titan. Working on the Cassini-Huygens mission, first as a post-doctoral researcher at the University of Colorado, and later as the mission deputy project scientist when I worked at NASA’s Jet Propulsion Laboratory, Titan captured my interest because it has a significant atmosphere. It struck me that this atmosphere shields Titan’s surface from the dangerous space radiation that affects other planets and moons in the solar system. For humans, the most dangerous space radiation is the energetic galactic cosmic rays. But even these particles don’t make it through Titan’s thick atmosphere.

Titan is arguably the most Earth-like place in the solar system, with its weather and (hydrocarbon) lakes—except that it’s COLD. The temperature at Titan is about 95K (-290°F), so water is frozen and hydrocarbons such as methane are liquid. But if we were to ever consider an outpost on Titan, these native materials would provide plenty of options for oxygen and energy production. I am so intrigued by Titan that, with a colleague, I wrote a book about the challenges of human space exploration and how Titan might be our best bet for a sustainable human settlement elsewhere in the solar system. It’s called Beyond Earth: Our Path to a New Home in the Planets.