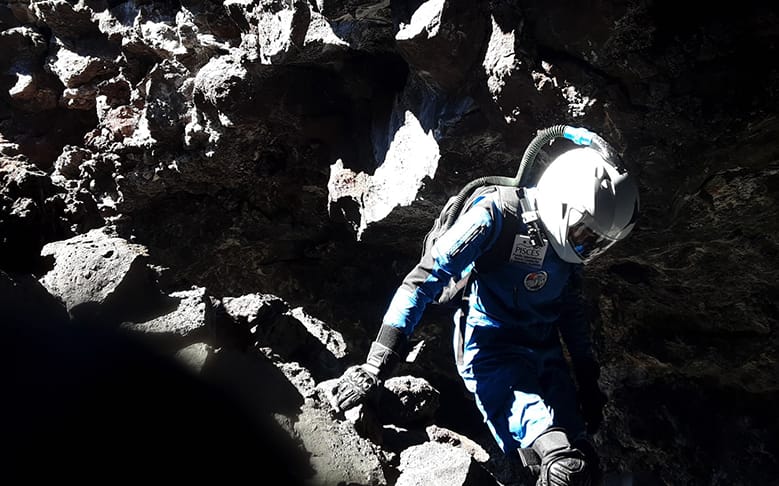 Above: PISCES geologist Kyla Edison descends into a lava tube on the lower slope of Mauna Loa during an EVA (Extra Vehicular Activity) as part of a simulated lunar mission led by the European Space Agency last month. Credit: EMMIHS-III/HI-SEAS.

“The mission was very successful,” said Commander Musilova. “The whole crew managed to perform most of the research that they desired to do during the mission and we all had a great time. This crew bonded very well and they were also the most efficient crew in terms of low water usage on record at HI-SEAS.”

On Jan. 18, 2020, their mission began with an overview of the dome-shaped HI-SEAS habitat, highlighting energy and water conservation as a top priority. The facility is solar-powered with battery storage, which can quickly be depleted during overcast or stormy days. To ration water, each crew member was allotted only eight minutes of shower use per week.

With little time to enjoy modern conveniences, the crew conducted a series of EVAs (Extra Vehicular Activities, or expeditions outside a spacecraft or habitat) in space suits carrying various tools and instruments. One EVA involved setting up a relay antenna to operate a 700-pound planetary rover. The rover, loaned by PISCES and named Helelani, served as a robotic crew member relaying information via sensors and cameras while bolstering the realism of the mission. Several smaller rovers accompanied Helelani including one provided by Zebro that was remotely controlled from the Netherlands.

On foot, crew members explored a series of massive lava tubes, mapping their terrain and taking small samples while mindful of leaving the ecology unharmed. PISCES geologist Kyla Edison collected three rock samples from the surface to test basalt sintering at high-altitude. Using a muffle furnace, she heated the samples in search of an ideal thermal profile that would result in a durable sintered basalt material. The process could be used to make structures like landing pads, shelters and berms on the Moon.

The two-week simulation was the third EuroMoonMars mission in a collaborative series led by the European Space Agency (ESA), the International Moonbase Alliance (IMA), and HI-SEAS. Since 2018, IMA has been organizing lunar and Mars simulations at HI-SEAS to help build a Moon base prototype in Hawai‘i as a proof-of-concept for the real thing.