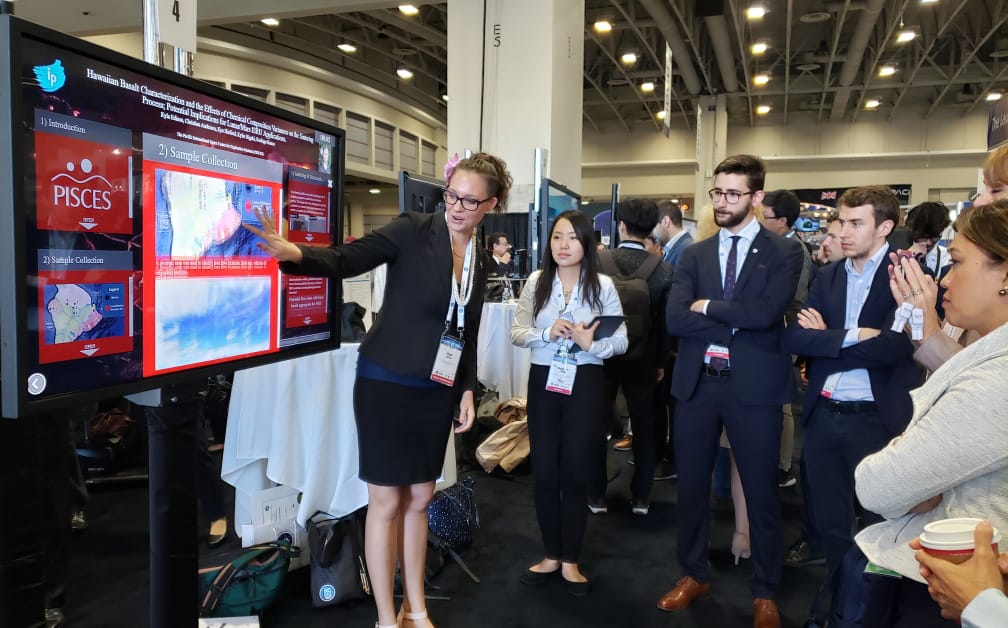 The 70th annual event was hosted in Washington, D.C. from Oct. 21 to 25, including more than 2,000 technical sessions and dozens of keynote speeches by distinguished space professionals. The presenters were authors, researchers and speakers from academia, industry and government, who shared new scientific and technological breakthroughs, advances in space science, research, technology and education.

Among the presenters was PISCES Geologist and Materials Science Technician, Kyla Edison, who created an interactive visual presentation based on her research paper, “Hawaiian Basalt Characterization and the Effects of Chemical Composition Variances on the Sintering Process.” Through images, graphics and video, Kyla presented her research showing how Hawaiʻi basalts vary in chemical and mineral composition, and the ideal composition for sintering a durable construction material. Her research in volcanic basalt can be applied to lunar and Martian regolith as the composition of these off-world deposits is extremely similar to Hawaiian basalt.

IAC is hosted each year by a member of the International Astronautical Federation (IAF), a nonprofit nongovernmental organization. IAF was formed six years after the Cold War ended to reconnect scientists from Eastern and Western Europe. It includes more than 340 members from 68 countries who work for space agencies, private companies, universities, governments and other entities. IAC is organized by IAF together with the International Academy of Astronautics and the International Institute of Space Law.

This year, IAC commemorated the 50th anniversary of the Apollo 11 Moon landing, celebrating the first human lunar surface mission and tipping a proverbial flight cap to NASA’s new Artemis program which plans to return humans to the Moon.