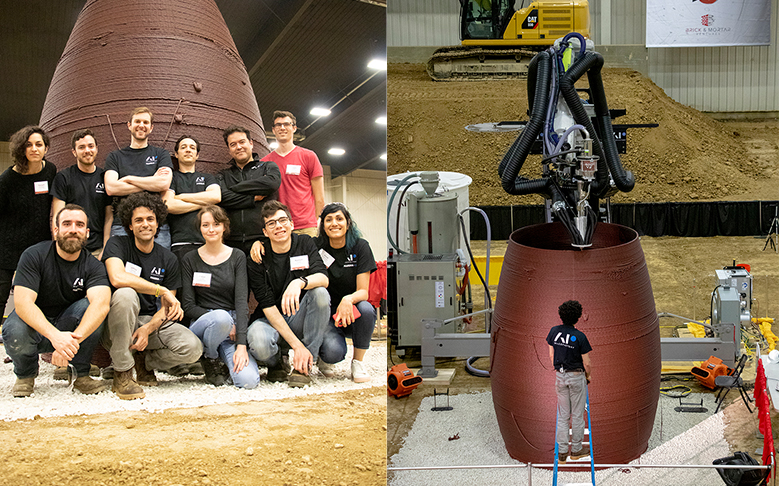 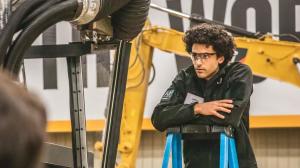 Four years ago, NASA kicked off an influential open competition called the 3D Printed Habitat Challenge. It was designed to advance the state of the art in additive construction, autonomy and architectural concepts that integrate structure, layout and construction processes. On May 4th (yes, May the Fourth), after three phases and $1.6 million awarded, the Challenge came to a dramatic conclusion at Caterpillar’s demonstration facility in Peoria, Illinois. The team I led at New York-based “multiplanetary architecture” startup AI SpaceFactory won the grand finale of the Challenge (and $500,000) by successfully printing our novel egg-shaped habitat design called Marsha.

Our victory involved putting together a robotic system that would print a large structure with as little human intervention as possible, mimicking the realities of actual space construction and using a material that is manufacturable on Mars. Reaching a height of 15 feet, Marsha stood as the tallest ever polymer-based continuous 3D print! The material, developed with Techmer PM and informally dubbed “Marsha Matter,” is far stronger than concrete and does not require rebar. Because we had only 30 hours to complete the structure—which was required to be a 1:3 scale of the true Mars design—our habitat was an empty shell at an average thickness of 1.5 layers (1.125 inches). But it nonetheless bested Caterpillar’s 90-ton excavator, causing its treads to lift off the ground during the final crush test and shocking the crowd.

I’m a space architect, which means I have the ludicrous job of designing spaces and structures for people to live where we cannot normally live. We take for granted the importance of architecture on Earth because we have the option of leaving the building. Outside this planet, however, we depend on buildings to keep us alive and well. Furthermore, the environments are so different from Earth that construction and materials must be entirely rethought. Structures must be resilient and interior layouts must be tuned to mission demands while fostering sustained social and mental health, which are also mission-critical. Extraterrestrial habitats must be designed to be rich, useful and interesting worlds unto themselves. With Marsha, I wanted to show that that world, that design object, could be both visionary and credible. I wanted to challenge the conventional image of “space age” domes by focusing on the creation of spaces tuned to both known and anticipated physical constraints and psychological demands.

AI SpaceFactory is already testing these technologies on Earth in the form of habitats anyone can stay in. We’re printing a family of structures called TERA (TERrestrial Analog) which will initially be direct descendants of Marsha and its technology. The first one is slated to begin construction this year in upstate New York and each TERA will build on the last until we achieve highly autonomous, structurally performing human-rated habitats. Just like Marsha informed TERA, the reverse will be true with all knowledge we gain feeding back into extraterrestrial design and construction, which will continue to be a major focus for us.

We are taking a bold Earth & Space approach to our business whereby both streams bootstrap each other so that we can get to Mars and advance sustainable ways of living on Earth. What good is it to work so hard to make new worlds possible when you have the best world right under your feet and the imperative to improve it?