The first image of a blackhole, “Pōwehi,” reveals a glowing ring of light surrounding a black void where gravity is so powerful, even light cannot escape. Courtesy photo: EAO/JCMT.

On April 10, 2019, the first image ever of a black hole known as “M87” was released to the world. Prior to this undertaking, blackholes had only been theorized and inferred through complex mathematical calculations. Now, there is undeniable, visible proof that they exist. Dr. Jessica Dempsey, deputy director of JCMT—one of two telescopes in Hawaii that contributed to the accomplishment—describes the incredible work that went into this groundbreaking image, and how it came to be named after an awe-inspiring concept echoed throughout the Hawaiian myth and creation chant, the Kumulipo. 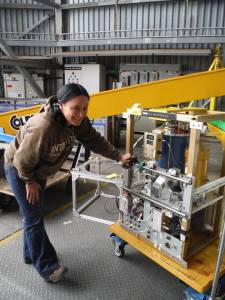 At JCMT on Maunakea, Dempsey stands next to the EHT receiver, an instrument that helped capture and create the first image of a black hole. Courtesy photo: EAO/JCMT.

Black holes are a tantalizing idea, often imagined as great monsters of the universe devouring everything around them. They’re also nearly always the first thing people will ask about when they find out you are an astronomer. They’re a hard concept to get your head around. Vast, dense and dark objects that we know should exist, mathematically, and we’ve had many scientific results that infer their presence. But to image one? Instinct tells us this should be impossible. What is most amazing is imaging one is nearly technically impossible too. The first marvel of this breakthrough was the key to successfully capturing light from the great beast of a black hole: teamwork.

One telescope wasn’t going to cut it. Neither was two, or three. In fact, it took the combined collecting power of nearly every telescope across the planet that could gather this type of light (millimeter-wavelength radiation) to achieve this. It took hundreds of technicians, engineers, telescope operators, scientists, theorists, software experts, plus a full two years of work after the April 2017 observing run to create this image.

Hawaii’s two submillimeter telescopes, JCMT and SMA, pioneered the technology for this work more than a decade ago. They were also the western anchor that allowed the image to have the clarity it did. And what a marvel it is—this beautiful ring of light, precisely the way that Einstein predicted. (When I saw the image for the first time, I thought it was a model because it was too perfect!)

Following this incredible accomplishment, we had the great fortune to sit with Dr. Larry Kimura of the University of Hawaii, an expert in Hawaiian language and naming practices. We described the image to him in detail and he immediately offered a word from the Kumulipo, the ancient Hawaiian creation chant: “Pōwehi.” It means adorned, embellished, fathomless darkness that creates. From its first lines, the chant of the Kumulipo explores the source of all things: “Pō,” the darkness from which everything in the universe was created. It’s a perfect name, and a wonder in itself. Now we have the opportunity to bring the deep beauty of Hawaiian scientific and cultural practices to a new audience around the world. And this is just the start. As Dr. Kimura told us, there are more than one hundred descriptions of Pō in the Kumulipo. So, we have some work to do!