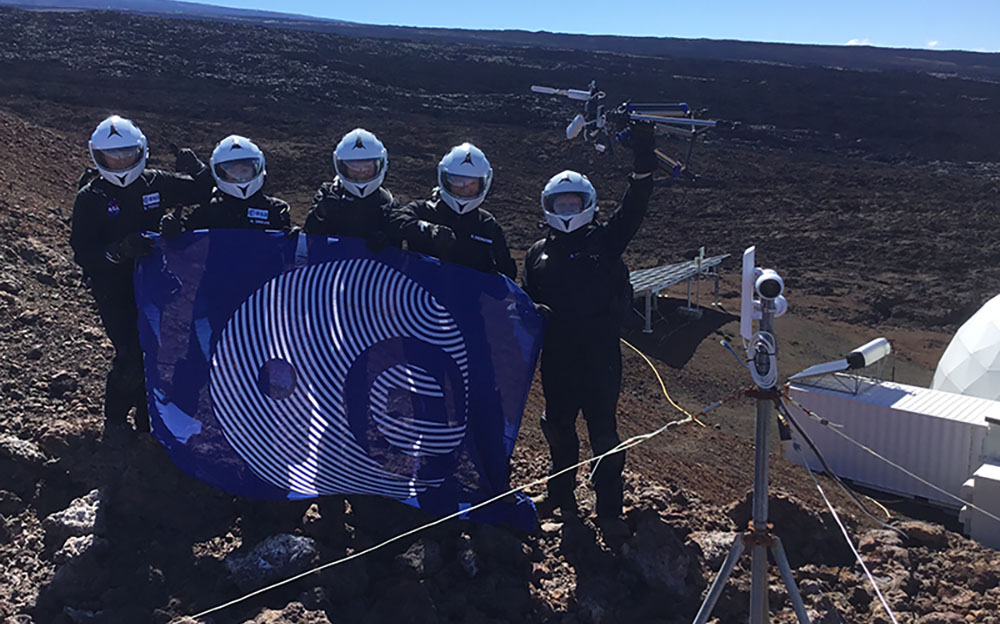 Above:  Five simulated astronauts stage an EVA to repair an antenna during a two-week mission at HI-SEAS in March 2019. Credit: Musilova/HI-SEAS. 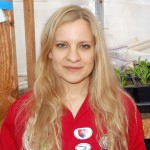 Astrobiologist Dr. Michaela Musilova is Director of the Hawaii Space Exploration Analog and Simulation (HI-SEAS) station, part of the International Moonbase Alliance (IMA). She has worked with NASA’s Jet Propulsion Laboratory, University of London Observatory, on NASA’s and UK Space Agency’s MoonLite project, and served as an analog astronaut at HI-SEAS and the Mars Desert Research Station. Michaela is also involved as a visiting professor at the Slovak University of Technology, a researcher at UH Mānoa and as a lecturer for the International Space University.

The HI-SEAS habitat is located at 8,200 feet (2,500 meters) elevation on Mauna Loa on the Big Island of Hawaii. It has been the home to five successful long-duration Mars simulation missions spanning four to 12 months since 2013. As of 2018, IMA—an organization dedicated to building sustainable settlements on the Moon—has been organizing regular simulated missions to the Moon and Mars at HI-SEAS. The research and technological experiments conducted at this facility will help build a prototype Moonbase in Hawaii to help build an actual Moonbase on the Moon (Mahina Lani).

From Feb. 20 to Mar. 6, I served as crew commander for a two-week simulated mission on the Moon at the HI-SEAS habitat. Our aim was to perform scientific experiments and test technological instruments needed for future exploration of the Moon. The mission was part of the EuroMoonMars initiative led by the International Lunar Exploration Working Group (ILEWG) of the European Space Agency (ESA), in collaboration with IMA, European Space Research and Technology Centre (ESTEC) and Vrije Universiteit (VU) Amsterdam.

Our crew came from all over the world and was able to complete all their mission targets. These included geological mapping of the Mauna Loa area for fresh pahoehoe lava flows and lava tubes by geology students Annelotte Weert and Sebastian Mulder. The study of the lava flows can help us understand how weathering processes affect this kind of geological material on Earth and what they would be like on other planetary bodies. Lava tubes could also be potentially used as shelters to build habitats on the Moon. The students used drone footage, imagery and 3D mapping to complement their research. Crew engineer and ESA systems engineer Nityaporn Sirikan completed work on enhancing the space suits and other technologies used at HI-SEAS. Her work will leave a new standard for future missions at the station and the feedback from the crew will allow for upgrades to be performed before another mission begins. 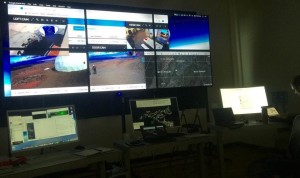 Other crew activities included several outreach and education projects by crew anthropology researcher Benjamin Pothier and crew journalist Josh Burstein, as well as myself. Last year, I organized a Mission to Mars competition in Slovakia which encouraged high school students to design a research experiment that could be performed during a simulated mission to the Moon or Mars. It involved collecting hair from crewmembers, dissolving it and using it as fertilizer to grow plants on the Moon. All crew members actively participated in all mission research projects and duties.

The crew’s activities and research projects were monitored regularly by researchers and engineers at the mission control center based at Blue Planet Research’s laboratory on the Big Island—a facility owned by IMA founder Henk Rogers. Bernard Foing of ESA and executive director of ILEWG, acted as the main space-crew communicator (CAPCOM) at the control center throughout the two-week mission.

Future missions at HI-SEAS are to continue in a similar format in terms of their length and the types of research being conducted. More EuroMoonMars missions are already being scheduled for later in 2019, as well as longer duration missions in collaboration with NASA’s Johnson Space Center, University of South Florida and companies such as SIFT and Ketone Technologies.
We are accepting new crew applicants and scientific project proposals for these upcoming missions. To apply or submit a proposal, contact me at musilova@moonbasealliance.com.