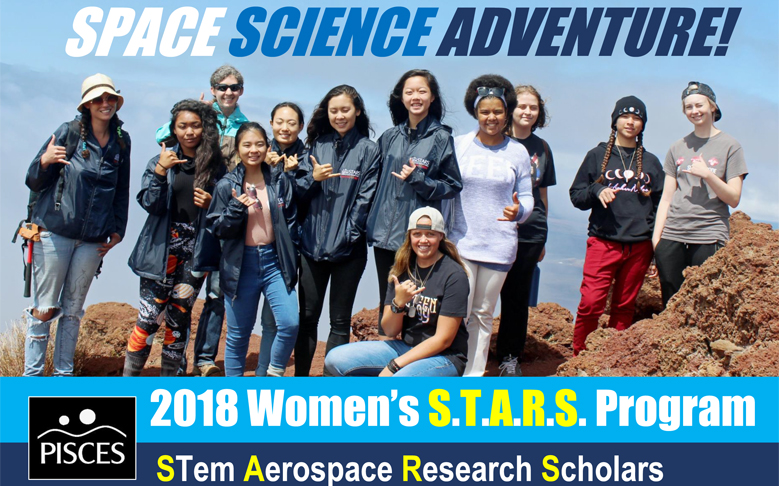 PISCES is now accepting applications for its fifth annual Women’s STARS Program! This week-long summer intensive for Hawaii high school girls immerses participants in the career world of STEM fields, introducing them to accomplished female scientists, engineers and educators who can serve as mentors and role models for their own academic and career paths in the future.

This summer’s program will feature a variety of guest speakers spanning the fields of Polynesian navigation, astronomy, geology, engineering, marine science and planetary science. Students will be engaged with hands-on workshops in robotics and conduct a mock-Mars mission with the PISCES planetary rover, “Helelani.” Participants will also be led on a series of behind-the-scenes tours exploring some of Hawaii Island’s world-class scientific research facilities, including the USGS Hawaiian Volcanoes Observatory, PISCES planetary analog sites, and several Maunakea observatories.

Twelve students will be selected to participate in the program, which will be held from July 9 to 13, 2018. There is no fee to attend STARS and all meals, transportation and overnight accommodations will be provided. Students must meet the following requirements to apply:

Now moving into its fifth year, the STARS Program was launched by PISCES in 2014 to encourage and inspire more young women in Hawaii to pursue STEM careers by engaging them in the working world of STEM with female role models and mentors.

According to a U.S. Department of Commerce report, “women are underrepresented both in STEM jobs and STEM undergraduate degrees and have been consistently over the last decade.” The report finds that although women fill close to half of all jobs in the U.S. economy, they hold less than 25 percent of STEM jobs. STARS is also a part of PISCES’ Workforce Development initiative to develop and cultivate more youth interest in high-technology education and career tracks that support Hawaii’s growing technology sector.

We wish to thank our continuing sponsor for the STARS Program, the Hawaii Technology Development Corporation (HTDC). This year, HTDC awarded a $4,000 grant to support meal, transportation and accommodation costs. STARS will also be supported through numerous partnerships with local science, education and nonprofit institutions and organizations this year.

Application documents and instructions are available online at this link: http://www.pacificspacecenter.com/2018-stars-program