PISCES Rover Gets Spotlight for Episode of ‘Space Craft’ 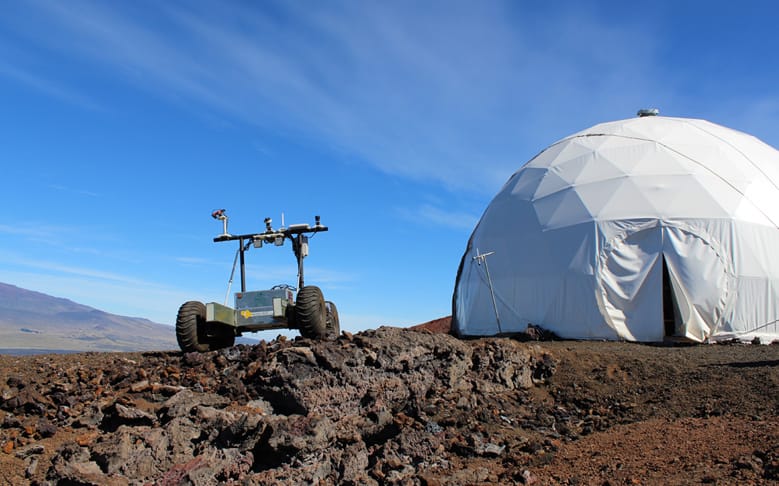 Above: ‘Helelani’ perched outside the HI-SEAS Mars simulation habitat on the slopes of Hawaii Island’s Mauna Loa.

PISCES’ planetary rover ‘Helelani’ and the HI-SEAS (Hawaii Space Exploration Analog Simulation) habitat will be featured in an upcoming episode of The Verge’s Space Craft, highlighting aerospace and space exploration research efforts in the State of Hawaii.

Space Craft is a space science and technology series produced by The Verge—a multimedia company focused on how technology will impact life in the future. Throughout the series, show host Loren Grush gets a first-hand look at the world of space exploration and space training exercises including astronaut VR programs, Martian space suits and zero-gravity flights.

While on Hawaii Island, Loren took the controls of Helelani for a mock-Mars rover mission at HI-SEAS on Dec. 12, 2017. Captured by a two-man camera crew and guided by PISCES Program Director Rodrigo Romo, Loren piloted the rover from a laptop within the habitat, traversing Mauna Loa’s rugged Martian-like terrain and capturing data of the surrounding environment.

On the following day, Loren and her crew focused on capturing footage of the HI-SEAS habitat and learning about the ongoing series of NASA-funded, long-duration simulated space mission studies conducted within the geodesic dome.

Footage from the “Mars mission” featuring Helelani and HI-SEAS is expected to air next Spring on The Verge’s YouTube channel.