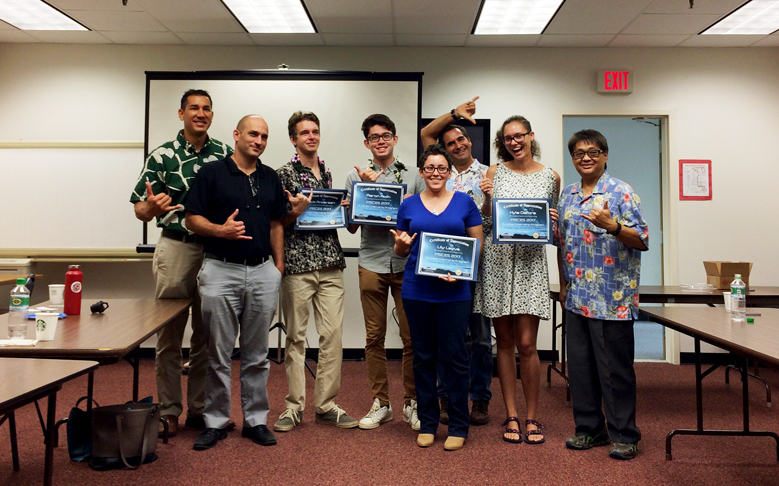 How many interns does it take to pave the future of space exploration?

Thanks to a grant from the Hawaii Dept. of Labor and Industrial Relations (DLIR), PISCES’ group of full-time interns delved into 10 weeks of Applied Research projects this summer that culminated in a final public presentation to a crowd of lawmakers, industry representatives, educators and members of the community on Friday, Aug. 11.

View photos of the event >> 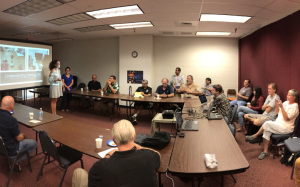 Lily described how she assembled a 3D printer (instructions not included), then designed and printed a new planetary building block based on a predecessor created during PISCES’ VT/VL Landing Pad project in 2016. As a returning third year intern, Kyla mentored Lily in the fundamentals of planetary geology, resulting in a successful field site survey using the Helelani Planetary rover. Both Kyla and Lily, led by PISCES Ops. Manager Christian Andersen, explained their research in basalt sintering and casting to make construction-grade materials using only heat and volcanic dust. The technology has potential applications for use in Hawaii and in space. 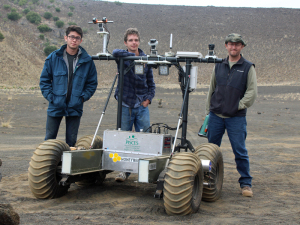 Robotics team members Aaron (Arizona State University) and Jack (Hawaii Community College) talked on the intricate details of their work upgrading the Helelani rover with a new operating system and stereoscopic imaging camera. During field tests at a planetary analog site, all three robotics students (including Andrew, also a HawCC student) assessed the new software and hardware systems through a series of remote sensing tests, traversing the rugged, lunar-like slopes of Maunakea from a mission control tent.

“This has been an amazing 10 weeks,” Jack said during his presentation. “It’s opened up a lot of new things for me to explore.”

Nakashima wrote in a Facebook post: “It was a pleasure to meet with this summer’s PISCES Interns who spent the last several months working on projects to further PISCES’ mission to increase the economic opportunities for the State of Hawaii.”