In the search for habitable alien worlds, Hawaii’s W.M. Keck Observatory on Maunakea has contributed a revelatory discovery of over 100 potential new exoplanets orbiting distant stars in the heavens.

The Hawaii Island telescope announced its findings on Feb. 13, drawn from analysis conducted on data gathered over a 20-year period. 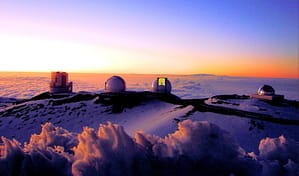 W.M. Keck’s twin observatories (shown in the middle) nestled atop the summit of Hawaii’s Maunakea volcano.

Scientists observed over 1,600 stars to find the new worlds using a special instrument called HIRES (High Resolution Echelle Spectrometers), which is mounted on one of Keck’s twin telescopes. By detecting minute wobbles in the rotation of nearby stars, HIRES is capable of detecting surrounding planets through the gravitational pull they exert. Scientists use complex algorithms to identify the faint signatures given off by potential exoplanets from the data they gather.

Scientists worldwide contributed to the painstaking analysis including astronomers and representatives from University of California at Santa Cruz, Yale University, Carnegie Institution for Science, University of Hertfordshire, and Universidad de Chile.

“The work of this team and their willingness to share data and techniques unveils a world of new possibilities, vastly increasing the ability of astronomers everywhere to perform in-depth studies of these exoplanet systems,” said Hilton Lewis, Keck Observatory director.