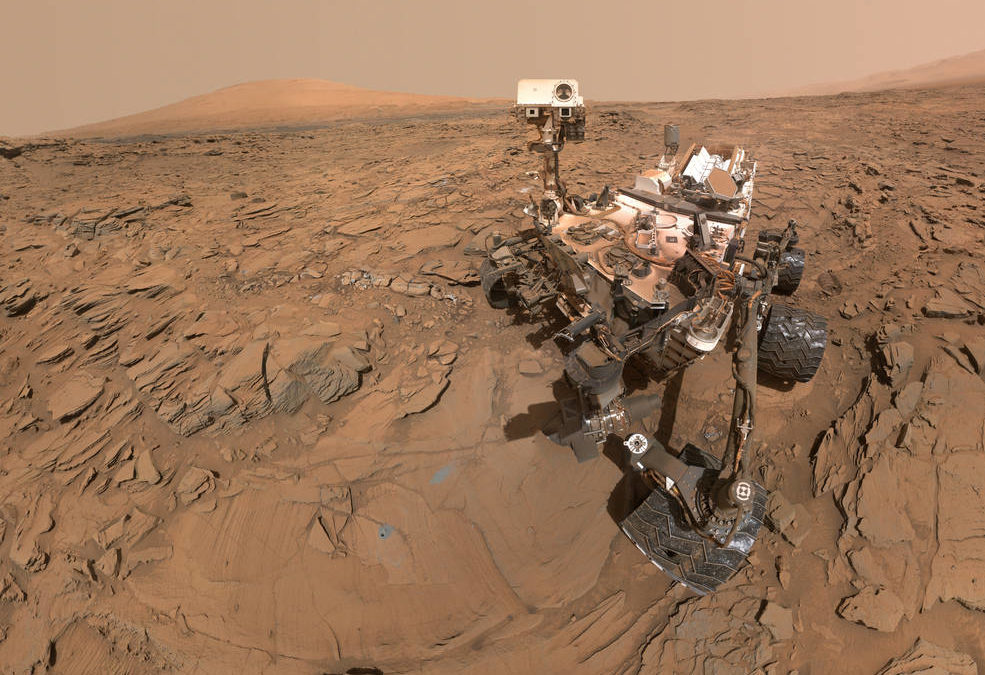 The following image was photographed on May 11, 2016 and features NASA’s Curiosity Mars rover on the lower part of Mount Sharp’s “Naukluft Plateau.” The scene is a mosaic of multiple images taken with the arm-mounted Mars Hands Lens Imager (MAHLI).

NASA’s Curiosity Mars rover has analyzed its 12th drilled sample of Mars. This sample came from mudstone bedrock, which the rover resumed climbing in late May after six months studying other features.

Since the previous time Curiosity drilled into this “Murray formation” layer of lower Mount Sharp, the mission has examined active sand dunes along the rover’s route, then crossed a remnant plateau of fractured sandstone that once more extensively covered the Murray formation.

While on the “Naukluft Plateau,” the rover examined its 10th and 11th drill targets to repeat an experiment comparing material within and away from pale zones around fractures. From there, Curiosity also took the latest in a series of self-portraits.

“Now that we’ve skirted our way around the dunes and crossed the plateau, we’ve turned south to climb the mountain head-on,” said Curiosity Project Scientist Ashwin Vasavada, of NASA’s Jet Propulsion Laboratory, Pasadena, California. “Since landing, we’ve been aiming for this gap in the terrain and this left turn. It’s a great moment for the mission.”

Curiosity landed near Mount Sharp in 2012. It reached the base of the mountain in 2014 after successfully finding evidence on the surrounding plains that ancient Martian lakes offered conditions that would have been favorable for microbes if Mars has ever hosted life. Rock layers forming the base of Mount Sharp accumulated as sediment within ancient lakes billions of years ago.

The Murray formation is about one-eighth of a mile (200 meters) thick. So far, Curiosity has examined about one-fifth of its vertical extent.

“The story that the Murray formation is revealing about the habitability of ancient Mars is one of the mission’s surprises,” Vasavada said. “It wasn’t obvious from pre-mission data that it formed in long-lived lakes and that its diverse composition would tell us about the chemistry of those lakes and later groundwater.”

The latest sample-collection target, “Oudam,” was drilled on June 4. On the Naukluft Plateau, Curiosity drilled “Lubango,” within a halo of brighter sandstone near a fracture, and “Okoruso,” away from a fracture-related halo, for comparison. The mission conducted a similar experiment last year, with two sample targets drilled at another exposure of the fractured sandstone.

This sandstone unit, called the Stimson formation, is interpreted to have resulted from wind that draped a band of sand dunes over lower Mount Sharp. That would have been after the main stack of the mountain’s lower layers had formed and partially eroded. Water later moved through fractures in the sandstone. Investigation of the fracture-related halos aims to determine how fluid moved through the fractures and altered surrounding rock. 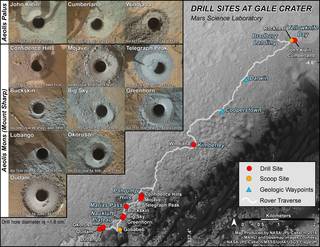 The following graphic shows 14 sites where NASA’s Curiosity Mars rover has collected rock or soil samples for analysis using the rover’s onboard laboratory. It also depicts the drilled holes where 12 rock-powder samples were obtained. Credits: NASA/JPL-Caltech/MSSS

“We were about to drive off the Naukluft Plateau and leave the Stimson formation forever as we go up Mount Sharp,” said Curiosity science-team member Albert Yen of JPL. “A few of us were concerned. The fracture-associated haloes were becoming more prevalent, and we had only one data point. With just one data point, you never know whether it is representative.”

As with the similar previous experiment, comparison of Lubango and Okoruso found higher silica and sulfate levels in the sample nearer to the fracture. Multiple episodes of groundwater flow with different chemistry at different times may have both delivered silica and sulfate from elsewhere and leached other ingredients away.

“The big-picture story is that this may be one of the youngest fluid events we’re likely to study with Curiosity,” Yen said. “You had to lay down the Murray, then cement it, then lay down the Stimson and cement that, then fracture the Stimson, then have fluids moving through the fractures.”

On Mount Sharp, Curiosity is investigating how and when the habitable ancient conditions known from the mission’s earlier findings evolved into conditions drier and less favorable for life.

Article by Guy Webster with the Jet Propulsion Laboratory in Pasadena, Calif.