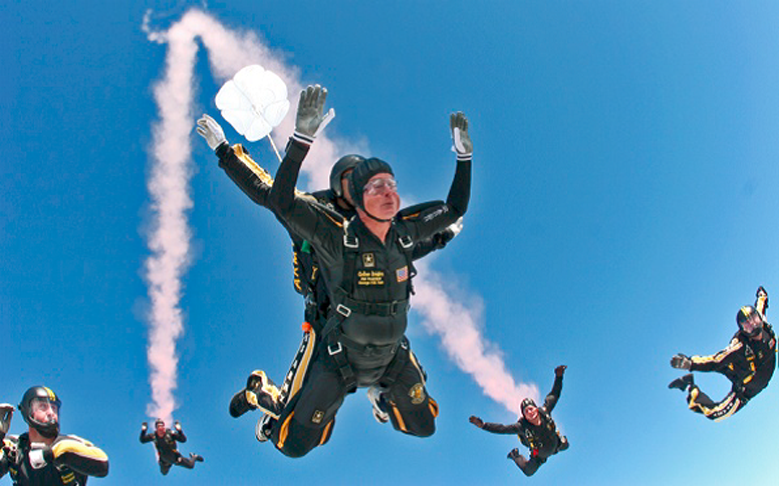 After six simulated Mars explorers took the plunge of an eight-month Red Planet colony experiment last fall, the pioneering group is now taking a literal plunge from high over Hawai‘i Island to simulate their return to Earth.

On Saturday, June 13th, the group, accompanied by Fitness Celebrity Tony Horton (who created the P90X fitness program), will complete their research mission by jumping out of an Army Chinook helicopter with the U.S. Army Golden Knights Parachute Team over the Kona side of the Big Island.

The crew have been living in a Mars-like habitat located on the slopes of Mauna Loa as part of a NASA-funded study.  The Hawai`i Space Exploration Analog and Simulation (HI-SEAS), as it is called, is led by researchers at the University of Hawai‘i at Mānoa.  The study aims to assess the psychological, social and biological effects of long-term isolation on a group of people, and is the longest study to-date conducted in the U.S.

The jump begins at 11 a.m. and the crew will be available for a meet and greet following their landing until 3 p.m.  Dr. Kim Binsted, University of Hawai‘i principal investigator, will be introducing the crew after their “Earth return,” and give a brief overview of some of the mission’s accomplishments.

During the Mars simulation, crewmembers used Horton’s P90X fitness program on a daily basis to stay fit and maintain healthy social interactions.  Horton was inspired to join the jump when he heard about the impact of his program on the mission.

Data gathered from the eight-month study will inform future preparations for a real-life Mars colony.  According to NASA, a manned mission to Mars is an eight-month trip each way.

For the last eight months, crewmembers have been living in this 36-foot diameter dome on the slopes of Mauna Loa simulating a Mars habitat. HI-SEAS photo.