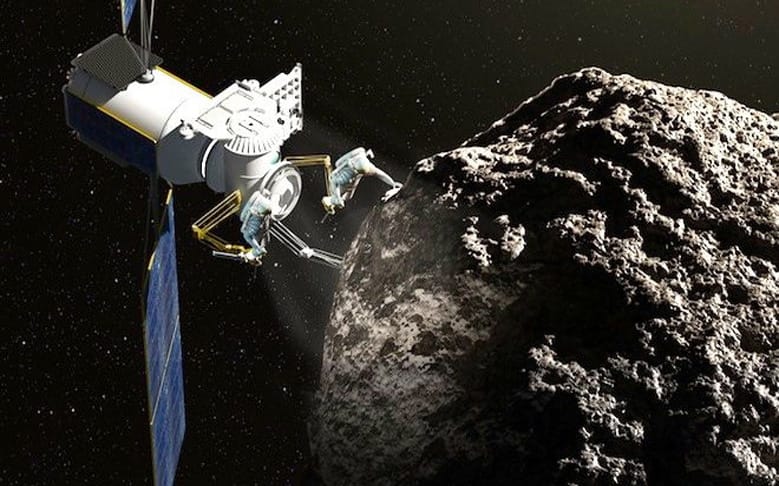 Image: artist rendering of a spacecraft retrieving an asteroid to place in lunar orbit.  Photo: NASA/AMA

NASA has announced the latest details on its ambitious Asteroid Redirect Mission (ARM) which aims to capture a boulder from the surface of an asteroid and bring it into lunar orbit for research by the mid-2020s.  The mission will also test new technologies and procedures for future manned missions into deep space, particularly Mars.

“The Asteroid Redirect Mission will provide an initial demonstration of several spaceflight capabilities we will need to send astronauts deeper into space, and eventually, to Mars,” said Robert Lightfoot, NASA associate administrator. “The option to retrieve a boulder from an asteroid will have a direct impact on planning for future human missions to deep space and begin a new era of spaceflight.”

One of these capabilities is advanced Solar Electric Propulsion (SEP), which utilizes sunlight to propel a spacecraft by charging atoms.  Though the travel time is slower, the energy use is much more efficient and can enable large cargo transports across space, thereby reducing costs.

Another assessment in the ARM mission will involve the testing of trajectory and navigation methods in deep space, and using the moon’s gravity as a ‘parking stall’ for the targeted space rock.

NASA has so far identified three rock candidates to rein into lunar orbit: Itokawa, Bennu, and 2008 EV5.  Each have been evaluated for their physical characteristics, rotation, and exact orbit.  The agency expects to find several more candidates leading up to the mission’s launch.

The mission plans to launch an unmanned spacecraft across space to the surface of an asteroid to retrieve a boulder using robotic arms.  The craft will then return with the rock to redirect the boulder into lunar orbit over the course of several years.  NASA expects the mission to take roughly six years, followed by a manned mission to the retrieved rock for study by astronauts in lunar orbit.

In conducting ARM, NASA also announced that it has increased detection of near-Earth asteroids by 65% since launching the program three years ago.  The mission’s data and operation is also enabling the agency to develop defense techniques to ward off potential asteroid threats to Earth, should a collision ever become imminent.  Though more than 12,000 Near-Earth Objects (NEOs) have been identified so far (96% larger than 1 km in size), none pose any threat to Earth within the next century, according to NASA.