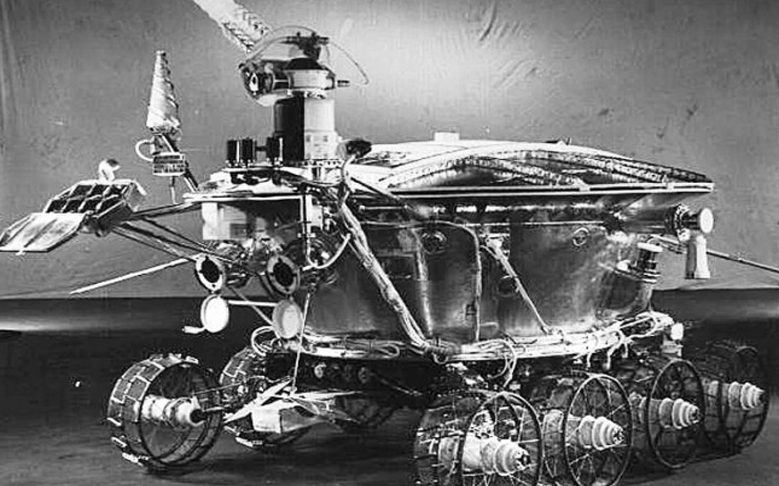 Today, robotic planetary rovers are becoming increasingly common.  But 50 years ago, such a thing was nearly unheard of.  That changed on Nov. 15, 1970, when the Soviet Union landed ‘Lunokhod 1’ on the surface of the Moon, making it the very first extraterrestrial rover in space.

Blasting off from the Baikonur Cosmodrone in present-day Kazakhstan aboard Luna 17, the eight-wheeled, tank-like spacecraft made a soft-landing in the fine lunar regolith in the “Sea of Rains” (Mare Imbrium) just five days later.

Lunokhod 1 boasted a slew of scientific instruments, four television cameras, and a nuclear-powered heating system to keep its devices working through the harsh lunar ‘nights’.  It transmitted data back to Earth using two different antennas, and employed an X-Ray telescope, essentially making it the first lunar astronomical observatory on the Moon.

Soviet scientists designed the Curiosity-sized Lunokhod 1 to survive up to three months – or three lunar “days”.  However, the craft surpassed their expectations, operating a total of 11 months (or 11 lunar “days”).  Lunokhod 1 in fact held the durability record for planetary rovers for 30 years until a new record was set by the Mars Exploration Rovers.

Despite ceasing operations in October of 1971, the craft is still being put to work.  Recently located in March 2010, NASA’s Lunar Reconnaissance Orbiter (LRO) spacecraft captured images of the rover and its tracts across the dusty lunar surface.   The following month, the images aided the Apache Point Observatory Lunar Laser-ranging Operation (APOLLO) team in beaming a laser at Lunokhod 1’s reflector, finding it to be one of the most efficient reflectors existing on the lunar surface.

“Lunokhod 1 is talking to us loudly and clearly,” said Tom Murphy of University of California San Diego, who leads the research team that’s putting the spacecraft back in action.

Nearly half a century later, Lunokhod 1’s legacy lives on.