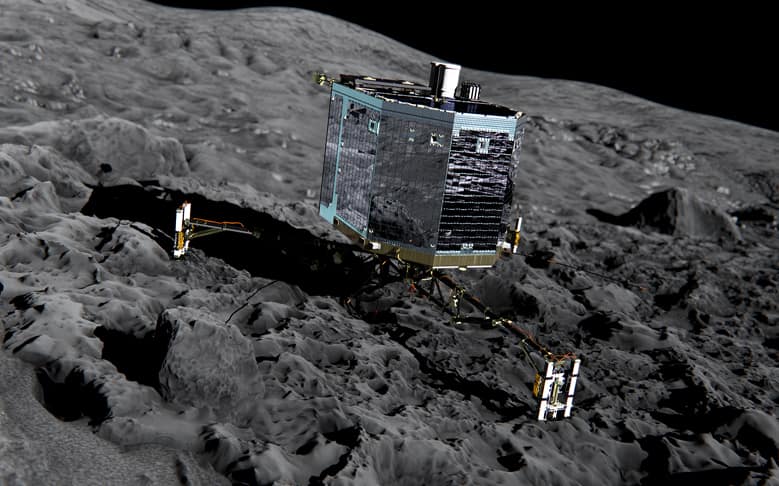 Today the ESA successfully made space exploration history by landing a spacecraft on a comet’s surface.  The suspense-ridden, historic event took place shortly after 11 a.m. EST, when the ‘Philae’ lander touched down on Comet 67P/Churyumov-Gerasimenko some 317 million miles from Earth.

Mission controllers endured “7 hours of terror” before learning of the successful outcome.  Radio contact was lost after Philae’s deployment from its parent spacecraft, Rosetta. 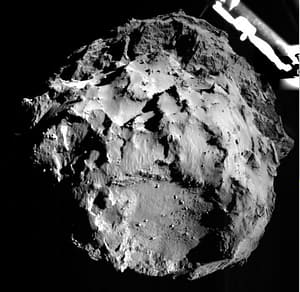 The Philae lander captured this close-up image of Comet 67P/Churyumov-Gerasimenko as it closed in for touch-down today, Nov. 12, 2014. Credit: ESA

The landing is one of the most difficult space missions ever attempted.  Roughly 40 years in the making, Rosetta and Philae traveled some 4 billion miles over 10 years to catch up to Comet 67P/Churyumov-Gerasimenko, an icy ball hurling through space at nearly 40,000 mph.

The scientists who discovered the comet 45 years ago – Klim Ivanovych Churyumov and Svetlana Ivanovna Gerasimenko – witnessed the historic landing at a viewing event and press conference hosted by the ESA.

Though Philae has safely made landfall on the comet, sensors indicate that its harpoon misfired.  Engineers are working to fix the problem, as the harpoon serves as an anchor to secure the craft to the comet’s surface.  However, ice screwed fitted into Philae’s landing legs will help keep it grounded in the meantime.

The mission is intended to conduct an in-depth analysis of comets, with the hope of gleaning a better understanding of how our solar system was conceived.  Scientists think comets may be responsible for bringing water to Earth early on, and Rosetta and Philae’s work may address this theory.

Philae’s 10 onboard instruments will monitor the comet’s surface and interior as it passes near the sun, and scientists hope it will operate until at least March 2015.

To read more about the historic mission, read the previous post links below regarding Rosetta and Comet 67P/Churyumov-Gerasimenko.