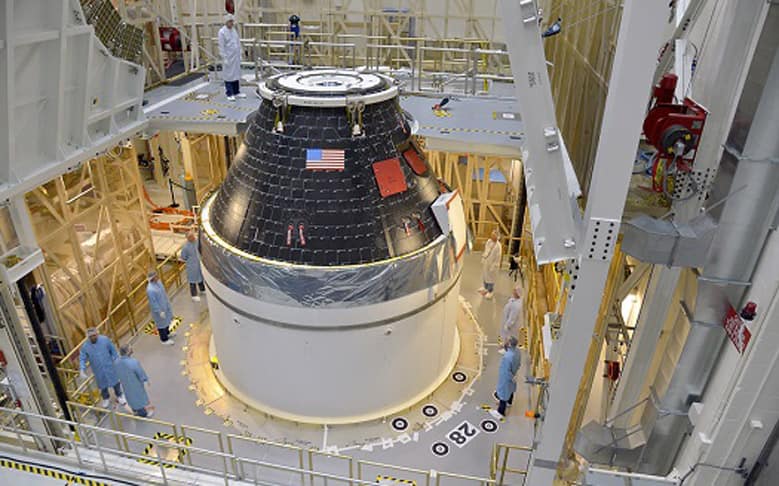 The Orion spacecraft is NASA’s first spacecraft designed for deep-space missions, and will carry humans further into space than ever before.  And the very first module has just been completed at Kennedy Space Center.

Capable of carrying up to four astronauts, Orion is built for multiple missions to interplanetary destinations, including trips to the Moon, asteroids, and Mars.

In December, the new craft will get its first test-flight aboard a Delta IV heavy rocket, travelling 3,600 miles at a distance 15 times farther from Earth than the International Space Station.  It will return into Earth’s atmosphere at a mere 20,000 mph, withstanding fierce temperatures of 4,000 degrees Fahrenheit. Though the journey will only last four hours, it will mark the longest trip a spacecraft (capable of carrying astronauts) has taken in over 40 years.

Another test launch is slated for 2017 to send Orion into space aboard NASA’s most powerful rocket ever built – the ‘SLS’ (Space Launch System).  Towering overhead at 38 stories in height, the SLS has two configurations – one of which packs a whopping 9.2 million pounds of thrust.  The energy generated by the rocket’s engines is so powerful, it would take 12 Hoover dams to generate the same amount of energy!  The immensely powerful SLS will enable Orion to reach deep-space destinations, making long-range journeys through our Solar System a reality.