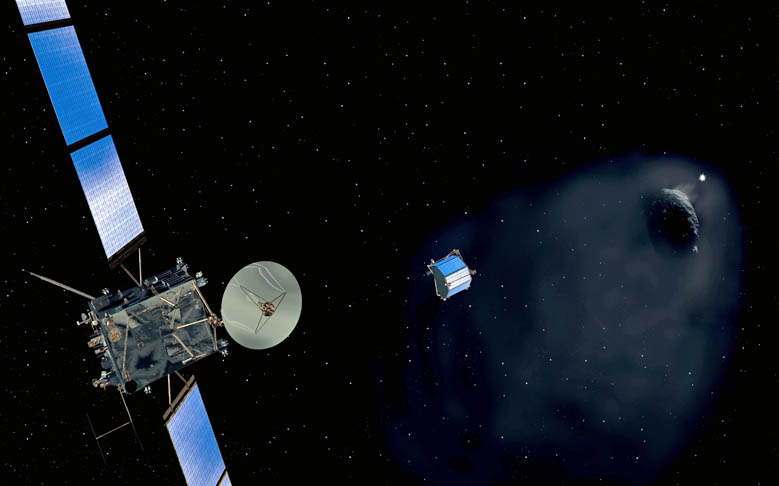 Artist rendering of the Rosetta spacecraft deploying its ‘Philae’ lander to the surface of Comet 67P. Image Credit: ESA.

The ESA’s (European Space Agency) Rosetta spacecraft has become the first in history to successfully lock into orbit with a comet.  And soon it will attempt an even riskier and more unprecedented endeavor – deploying a lander to the comet’s dark, dusty surface of cliffs, plains, and large crevices.

Hurtling through space at a mere 34,000 mph, Rosetta rendezvoused with Comet 67P on August 6th, following a 10 year journey that spanned over four billion miles.  The successfull meeting was no small feat.  Rosetta circled the Sun five times, made two gravity-assisted flybys around Earth, and one around Mars to catch up with its targeted companion.

Rosetta is now identifying potential landing sites to deploy its ‘Philae’ lander to attempt a historic touchdown in November.  If all goes well, a successful landing will enable Philae and Rosetta to collaborate in mapping the comet’s interior structure using radio waves.

Images reveal five potential landing sites identified by the Rosetta spacecraft for its Philae lander which will attempt an unprecedented touchdown on Comet 67P in November. Credit: ESA.

Scientists are excited about the possibilities of exploring Comet 67P.  Because comets are ‘spare parts’ left over from the solar system’s creation 4.6 billion year ago, they’re made up of untouched materials that may yield valuable insights into the beginning and evolution of our planetary neighborhood.

“The comet is very different to anything we’ve seen before, and exhibits spectacular features still to be understood,” says Jean-Pierre Bibring, a lead lander scientist involved in the mission.

Comet 67P, currently about 522 million kilometers from the Sun, makes a solar orbit once every 6.5 Earth years, and Rosetta will accompany it for one year of that journey, extending well beyond the reaches of Jupiter.

A diagram of the Rosetta spacecraft’s trajectory through the solar system to meet with Comet 67P. Credit: NASA.