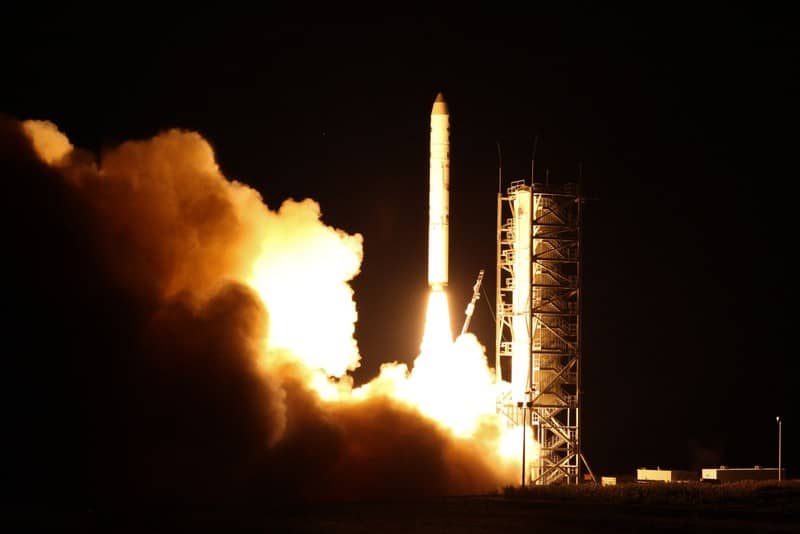 On Friday, September 6, Krystal and her mentor, John Hamilton, PISCES Test Logistics/Education and Public Outreach Manager, witnessed NASA’s Lunar Atmosphere and Dust Environment Explorer (LADEE) Mission blast off in Virginia. Their trip was made possible thanks to generous donations through PISCES fundraising efforts.The weather made for a perfect lift-off, which went as scheduled for 5:27 p.m. Hawaii time at NASA’s Wallops Flight Facility.

Krystal is a UHH Sophomore majoring in Astronomy. She was hired for the PISCES 2013 Summer Intern Program through the Akamai Workforce Initiative, and her main task was to collect data for LADEE (pronounced “LADDIE”, not “LADY”).

LADEE is a $263 million project designed to unlock the mysteries of the Moon’s fragile atmosphere. Studying and understanding the Moon’s environment is key to figuring out how to live there.

The mission involves launching a nearly 850 pound robotic spacecraft on top of a U.S. Air Force Minotaur V rocket, which is an excess ballistic missile converted into a space launch vehicle.

It will take LADEE 2.5 months to reach the Moon, check its instruments, and get situated into its designated orbit before starting its 100-day mission to gather information about the Moon’s exosphere (the very thin, outermost layer of the Moon’s atmosphere) as well as its lunar dust environment.

And studying the lunar dust is where Krystal’s work comes in. Some of the dust in the Moon’s exosphere may likely be caused by meteors that hit the Moon and propel lunar debris.

Krystal and John spent this past summer measuring the impact and frequency of these meteor strikes on the far side of the moon. They used two 11” Celestron telescopes equipped with high speed video cameras to collect the data for LADEE, which NASA will use to learn more about the Moon’s lunar dust environment and help quantify the possible dangers inherent with living on the Moon.

NASA invited Krystal and John to be a part of the official launch efforts, joining the Public Outreach activities at the Wallops Island Visitor Center. Mahalo to Krystal and John for all of your hard work!